Perth-based surveying firm McMullen Nolan Group is focusing on rolling out its laser scanning technology across the industry, as it marks its 25th anniversary by rebranding its operations as MNG. 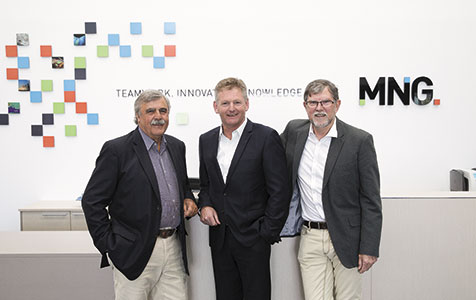 Perth-based surveying firm McMullen Nolan Group is focusing on rolling out its laser scanning technology across the industry, as it marks its 25th anniversary by rebranding its operations as MNG.

MNG managing director Scott Anderson said the company had developed a mobile laser scanning device in-house during the past three to five years.

Mr Anderson said about 70 per cent of the company’s revenue currently came from residential land development, with MNG holding around 40 per cent market share across the state’s major developers.

But he said MNG’s mobile laser scanning technology was the company’s next big growth prospect.

The technology is best applied to infrastructure development, including road, rail, pipelines and powerlines.

MNG’s device marries high-speed laser scanners with high-accuracy GPS technology and the company’s own data collection software to eliminate the need for surveyors to work on roads or rail lines.

“We see that as a growth area for us and we’re exploring opportunities in the eastern states, as well as activity in the US,” Mr Anderson told Business News.

“There may well be licensing and there is also the adaption to airborne laser scanning.

“I would like to think that, in the next 12 months, our footprint would expand in that area.”

John McMullen and Gerry Nolan founded MNG in 1989, with its primary focus being the provision of surveying and spatial solutions for Western Australian residential land development.