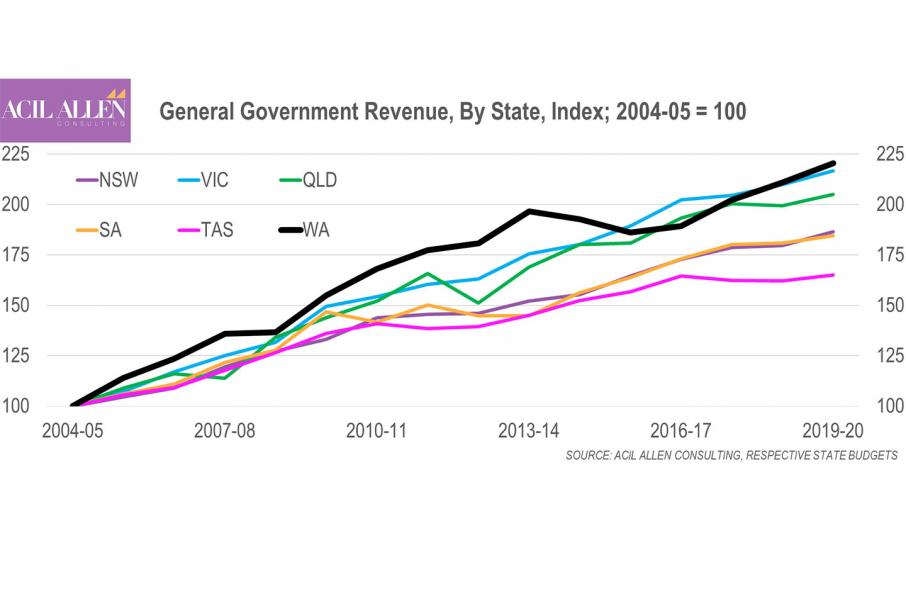 Former Western Australian under treasurer John Langoulant has blasted the approach of the previous Liberal-National government to achieve a better goods and services tax deal for the state as “ill conceived and a distraction to cover its poor financial management”.

Mr Langoulant has called on the new Labor government to adopt a fresh strategy in a bid to get an improved financial deal out of the federal government to compensate for the miserly return on the GST.

WA’s federal Liberal MPs are being urged to exert more pressure to boost the amount of GST revenue returning to the state.

If the allocation were on a per-head basis, WA would have received an extra $3.6 billion this year. But some other states would have got less, a fact that is holding back reform.

Mr Langoulant, who headed up the Treasury between 1995 and 2004, said revenue was not the problem.

“Other states can see that WA’s total revenue has grown better than theirs over recent years, even with our low GST share,” he said (see graph).

“They know WA has a spending problem, didn’t plan for lower commodity prices, and aren’t about to compensate us with more GST for indulging in that largesse.

“These GST arrangements have been long in place, even before the GST came along, and have endured much scrutiny.

“While they are not perfect, asking the Commonwealth to change the arrangements to suit us at the cost of others is the wrong argument.

“A much better approach is to get our spending under control and press for a larger share of Commonwealth infrastructure funding on worthy projects.

“That will help reduce debt while building the economy by growing infrastructure, and result in a reduction in the deficit regardless of what the GST share does.

“WA’s GST return on a per capita basis has been below 40 cents in the dollar in recent years due to the massive royalty increases it has received since the early 2000s.

“Despite resources prices easing in recent times, WA is benefiting from increased iron ore exports and the GST formula has a three-year time lag, so it still picks up some of the ‘good times’.

“But that will soon change.”

Mr Langoulant spoke out as political leaders indulged in finger pointing over the GST issue.

Mr Nicolaou says establishing a “machinery of government” process to identify where waste can be eliminated across departments and agencies “should find billions of dollars worth of savings”.

“Repairing the budget is essential because otherwise the excesses of today will have to be paid for by future generations,” he says. “That is poor management.”

Mr Nicolaou agrees with Mr Langoulant that high levels of government spending, not revenue, have been the main problem. Resorting to increased taxes and charges to close the gap was not the solution.

“Adding any extra burden on taxpayers would be difficult, so it’s essential the government look at its spending,” he says.

“There also needs to be a clear communication with the public that this is a significant challenge.”

Former Liberal MHR John Hyde, a prominent economic ‘dry’, said one area of potential savings was the Royalties for Regions program, which earmarks about $1 billion annually to top up spending in the regions.

“The so-called Royalties for Regions program has formalised pork barrel politics on a massive, perhaps unprecedented, scale,” he says.

Mr Hyde wants administration of the program to be incorporated into the Treasury to ensure “some sound procedures … become general practice”.

Mr Langoulant has identified one item, not on the balance sheet, as crucial to the government’s prospects: a strong working relationship with the public service.

“It’s probably the greatest resource available to the government when used properly,” he says.

Meanwhile, Mr Wyatt is confident he can find savings of $750 million without too many shrieks of horror despite union pressure for more jobs, such as in education.

The ball’s in his court.