Perth's office market remains on solid footing despite a rising vacancy rate that’s forecast to peak at 19 per cent in 2016, with pundits saying the state’s strong economic fundamentals and a small construction pipeline past 2015 will bring balance back into the sector. 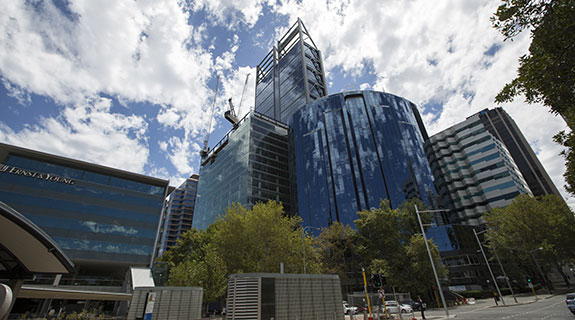 IN DEMAND: Ashurst is the latest tenant to sign on at Brookfield Place Tower 2. Photo: Attila Csaszar

Perth's office market remains on solid footing despite a rising vacancy rate that’s forecast to peak at 19 per cent in 2016, with pundits saying the state’s strong economic fundamentals and a small construction pipeline past 2015 will bring balance back into the sector.

The Property Council of Australia released its office market report yesterday, with the CBD vacancy rate hitting 14.8 per cent, up from 11.8 per cent in July last year.

Colliers International director of office leasing Neil Kidd said the agency predicted that rate to increase to 19 per cent in 2016, but to come back to current levels, which he described as a ‘normal market’ by the end of 2017 because no new buildings were in the construction pipeline.

Mr Kidd said the projected 10-year average investment of all Western Australian companies from 2014 to 2024 of around $43 billion per year, which is more than four times the 20-year average from 1985 to 2005, would ensure sufficient office demand to ease any landlords’ concerns.

Owners of existing buildings will feel much of the impact of the current construction cycle of 156,000 square metres – including four office towers being built at Kings Square, another significant project at the Cathedral + Treasury Precinct and the second tower at Brookfield Place – because the new projects are largely pre-committed.

Shell, HBF and John Holland will take up the lion’s share of space at Kings Square, GHD Woodhead will anchor QUBE Property Group’s 999 Hay Street, while Mirvac Group’s 33-level office tower, part of the Cathedral + Treasury Precinct, is subject to a 99-year lease by the state government.

Brookfield Property Partners signed law firm Ashurst to take up two floors at the second tower at Brookfield Place last week, to take that building’s pre-committed tenancies to more than 50 per cent.

All of those buildings are expected to be complete by the end of the year, while the only major project in the future pipeline is Woodside Petroleum’s proposed 31-storey new home at AAIG’s Capital Square.

One of the buildings to be most affected by the roll out of new space, however, is the oil and gas giant’s current headquarters, Woodside Plaza.

The building is owned by DEXUS Property Group, and the landlord’s regional general manager of office and industrial investments, Scott Travers, told attendees at the launch of the Property Council’s report that preparations were being made for Woodside’s exit, expected to occur in 2019.

Woodside is not alone in vacating the building, with major tenants Corrs Chambers Westgarth and Deloitte also moving, to Brookfield Place Tower 2.

“We’re currently preparing our plans for life post-Woodside, but we all must remember that 240 St Georges Terrace is a premium-grade building in a very good location, and we will obviously invest capital in the property very prudently so it represents itself very strongly in the marketplace,” Mr Travers said.