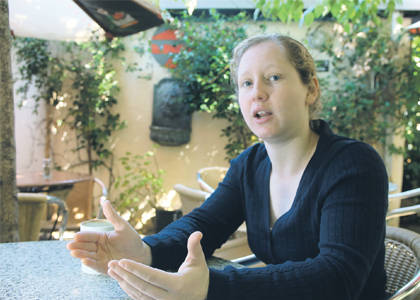 BEYOND BORDERS: Maeve Lander’s web development skills are in demand worldwide, with a customer in Sweden among her growing clientele. Photo: Bohdan Warchomij

A PERTH woman’s expertise in a popular web development platform is attracting interest and business opportunities from across the globe.

At just 24 years of age, Maeve Lander is a small business owner employing three staff to help her satisfy that global demand. Even so, Ms Lander says she’s turning work down every day.

It’s her skill in operating the open-source web development platform WordPress that’s creating the momentum for her business, Engima Digital.

WordPress began as a content management system for bloggers but has grown into one of the most common platforms for websites including the Wall Street Journal, Harvard Gazette, Time Magazine, Forbes, Sony, New York Times blogs, and CNN’s Politics page.

WordPress now accounts for 17 per cent of sites on the web and has 63 million active users - a number growing by 100,000 every day.

“It was like a whole new world just opened up,” Ms Lander told WA Business News.

“When you find something you’re passionate about it’s easy to stay motivated.”

That interest led to freelance contracts building WordPress websites for small businesses while Ms Lander was at university, and after-hours jobs when she worked as a designer.

It wasn’t long before she decided to ditch her roles with major web development companies to focus solely on her niche.

“When I was working for these businesses I was amazed at what people would pay for a simple web presence; in terms of man hours it would take about 12 hours and these companies would charge maybe $10,000 minimum,” Ms Lander said.

Large web development firms traditionally build and sell their own propriety content management systems on which to build websites, which partly justifies the higher prices.

Ms Lander said that was a suitable option for large businesses, but the open-source option was cheaper and had additional benefits.

The open-source philosophy centres on the idea that the code and improvements made to it are available for developers worldwide to use and modify.

“People associate open source with less stability, but I would argue the opposite; you’ve got a community of tens of thousands of developers all working on it all the time,” Ms Lander said.

Engima Digital is focused on building websites for small businesses, but about 50 per cent of its work comes as overflow from larger web development firms.

Last year also marked Ms Lander’s first foray into app development, which she said had turned out to be much less profitable than building websites.

Her focus for the coming year is on further enhancing her WordPress skills, which are already proving to be a profitable asset outside of website-building jobs.

She has been developing what are termed as ‘plug-ins’ for WordPress - essentially additional functionality to bolt on to the WordPress platform.

One such tool has been the development of an audio player, for which people from all over the world have paid to add to their WordPress sites.

Priced at $25 per download Ms Lander said the plug-ins were generating income of about $800 per week, with demand for more developments coming from all over the globe - Sweden as an example.

“It’s amazing to think that you’ve exchanged more words with a developer in Sweden over discussions about a coding problem than what you may have said to your house-mate,” she said.