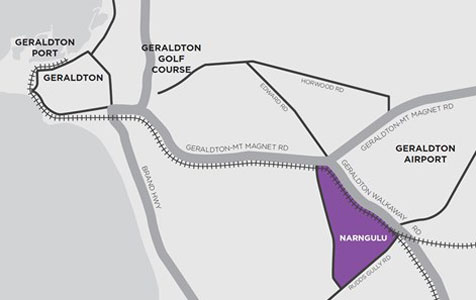 LandCorp has placed a 4.55-hectare parcel of industrial land near Geraldton on the market, in an effort to meet rising demand from businesses seeking large plots of land near the Mid West city.

The land is part of the Narngulu Industrial Estate, which previously had been targeted by Gindalbie Metals subsidiary Karara Mining for use as a transport link between its namesake Mid West iron ore mine and the now-stalled Oakajee Port, as an alternative to having to pay to use the proposed Oakajee rail line to take its ore to port.

However, Karara dropped the proposal to access the land midway through 2012 to pursue alternative arrangements to take its ore to market, citing onerous conditions to acquire the estate imposed by the Warden’s Court.

LandCorp’s release comprises 27 titles at the 4.5ha estate, which the agency has listed for sale from $20 per square metre.

LandCorp chief executive Frank Marra said the agency would work with prospective buyers to meet their needs by providing flexibly sized parcels of land in the estate.

“Whether businesses are attracted to the full 4.55 hectares or there is a need for smaller blocks, we will work to ensure the land is fit for the purpose,” he said.

Mr Marra said Narngulu was ideal for transport, logistics and manufacturing businesses, particularly those servicing the resources sector, with its proximity to road and rail links.

“It is also well-positioned for use as an intermodal transit point due to limited storage at the port,” he said.

Existing operators at the estate include Iluka Resources, Brookfield Rail and Centrals Civil.

Aurizon is also active in the area, with its Narngulu East rail facility having begun operations in early 2013.

The facility provides maintenance services for trains carrying ore to the port of Geraldton from the Karara mine.