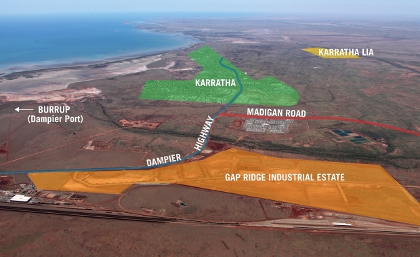 FROM ABOVE: An aerial view of the Gap Ridge estate in Karratha. (Photo: LandCorp)

State agency LandCorp says it is expecting significant interest in its latest industrial land release in the Pilbara, stage three of the Gap Ridge industrial estate near Karratha.

The third stage of Gap Ridge comprises six lots, ranging from 4.14 hectares to 6.08 hectares in size, to be sold by private treaty.

In total, Gap Ridge will deliver 114 lots over five stages, across 260 hectares.

“Our latest release at the estate is highly suited to businesses looking to expand or relocate operations in the Pilbara,” Mr Hackett said.

“Private developers seeking to build to tenants’ specifications and businesses seeking to capitalise on regional resources growth can also benefit by locating at Gap Ridge.”

The stage three release at Gap Ridge follows yesterday’s announcement from Lands Minister Brendon Grylls that works were gearing up at the Wedgefield industrial estate near Port Hedland.

Mr Grylls said civil works began earlier this month to create 37 lots in a new part of the estate known as Hedland Junction.

Works now under way include the creation of 21 lots in the light industrial area nad 16 lots in the transport or related uses section of the estate.

Mr Grylls said the 280 hectare Hedland Junction was a crucial part of LandCorp’s plans to support business capacity in the Pilbara.

“Georgiou Group has been contracted to undertake the works which started this month and are expect4ed to be completed by May 2012,” Mr Grylls said.