LandCorp has launched the first-stage of its ambitious Cockburn Coast redevelopment project, which it envisages will become home to 12,000 people in medium and high-density housing. 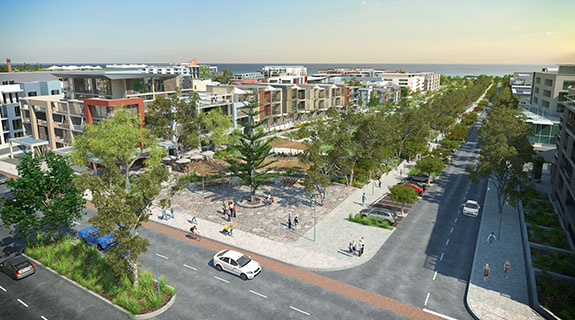 An artist's impression of the new Cockburn Coast redevelopment project.

LandCorp has launched the first-stage of its ambitious Cockburn Coast redevelopment project, which it envisages will become home to 12,000 people in medium and high-density housing.

The project area covers 106 hectares along a 1.5-kilometre stretch of coast between South Beach and Port Coogee.

The total investment by the government and private sector is estimated to be about $4.9 billion over the next 20 years.

The overall project will primarily consist of medium-density developments of between three and five storeys.

It also includes apartments of up nine storeys, located on higher land away from the coast.

“The Cockburn Coast redevelopment is something that has never been attempted before in WA on this scale,” he said.

“It’s medium and high density, and it will offer a diversity of housing types.”

The redevelopment will include commercial and retail opportunities, entertainment and hospitality centres, and a new school.

Mr Redman said the South Fremantle power station building would become the entertainment and commercial centrepiece of the project, but this aspect was likely to be about 10 years away.

City of Cockburn Mayor Logan Howlett praised the overall project, but pushed for a light rail service that would run 4km south from central Fremantle.

“The cities of Fremantle and Cockburn believe light rail is essential for this development,” Mr Howlett said after the project launch.

LandCorp’s project plan includes provision for a bus priority corridor, which it says could be adapted to light rail.

Contractor Wormall has commenced civil works this week on a 9ha parcel of land.

The Shoreline precinct, which is the initial focus, comprises 47ha and has a projected population of 5,000 people in 2.500 houses and apartments.

The request for proposal for the initial lots is through selling agent McGees Property.