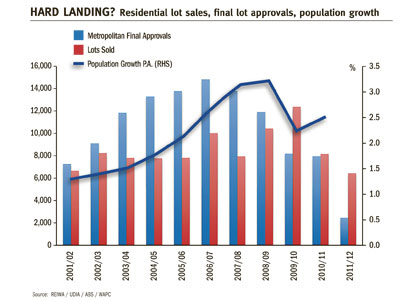 Perth has recorded a jump in land sales in the June quarter despite further signs developers are finding it increasingly difficult to bring land to a growing market.

Land shortages are tipped to worsen as the population in the Greater Perth Region, which takes in the wider Peel, Bunbury and Avon regions, is forecast to grow by 727,000 people over the next 20 years.

The Real Estate Institute of Western Australia said land sales in the June quarter had jumped 25 per cent on the March quarter.

“Preliminary data is showing a 25 per cent lift in land sales … suburbs such as Baldivis, Butler and Byford on the outer edges of the metropolitan area saw the greatest number of land sales in the year to June quarter,” REIWA president David Airey said.

However, land sales for the year to June 30 are still down on the 2011 financial year and are well below a much stronger 2010.

According to the market overview, 280,000 new homes are needed over the next 20 years to accommodate the population increase in the greater Perth region.

But the Western Australian Planning Commission’s ‘Directions 2031’ initiative has only planned for approval of 174,000 sites.

The GPR population increase accounts for 82 per cent of the state’s overall population growth. The WAPC has earmarked the Perth, Mandurah and Murray regions as the most popular residential areas.

But according to the Knight Frank report, development in these areas is being held up by tight financing conditions, rezoning delays, inconsistent time frames and high infrastructure costs being pushed on to developers.

“Banks are rarely interested in funding GPR land and will not fund ‘land banking’, which previously allowed developers to get ahead of the urban front and purchase land economically,” Urban Development Institute of Australia WA CEO Debra Goostrey said.

Ms Goostrey said the core issue holding up land approvals was inconsistent time frames in getting development approvals through the system.

“UDIA conducted a national study on how long it takes to get development approvals through our system, Western Australia has the greatest variation between the best-case and worst-case scenarios, meaning we hold the greatest risk in the country,” she said.

“This means that from site identification to titles being issued for subdivided land can take from just over six years to well over 16 years.”

Another issue facing developers was rezoning delays caused by the Department of Planning’s preparations for its outer metropolitan growth strategies, due to be completed in April next year.

Ms Goostrey said the strategy would restrict the rezoning of rural land into urban developments as it aimed to increase ‘infill’ developments in established suburbs.

“Developers routinely bear the cost of water, waste water and power; however, increasingly they are being charged for other infrastructure such as libraries, sporting facilities, boat ramps or realignment of roads within the region,” Ms Goostrey said.