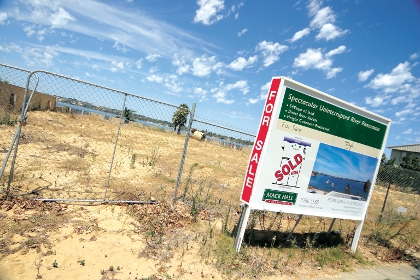 The HIA and RP Data’s quarterly look at land sales showed Perth’s median residential land value hit $237,000 in the December quarter, up 3.1 per cent on September.

The volume of sales over the last five quarters was 32 per cent lower than the long-term average, the HIA said.

“This is a clear indictment on current policy settings, on both the micro and macro levels, in their failure to address the multi-speed economy,” the report said.

“Even WA, home to the nation’s resources boom, has not translated this activity into its own housing sector.”

Land sales in the south eastern region suffered a 14.9 per cent decline over the quarter, while sales dropped by 3.3 per cent in the South West.

Nationally, land sales hit a fresh low after falling 27 per cent over the year to December 31.

“This situation points to there being no discernible recovery on the horizon for new home building, further highlighting that current policy settings in Australia are inappropriate,” Dr Dale said in a statement.

“Interest rates are too high, plans for contractionary fiscal policy untimely and too tight, state housing reform too slow and cooperative reform efforts across levels of government too difficult to find.”

RP Data research director Tim Lawless said conditions in the vacant land market were the weakest in more than a decade.

“Vacant land markets are substantially weaker now than what they were back in the height of the GFC and the duration of the downturn has been sustained for five quarters,” Mr Lawless said in a statement.

“Compare that to the dwelling market where transaction volumes are about 28 per cent lower compared with the 2009 highs, which is a weak result in itself, and the significant weakness in the vacant land market becomes even more apparent.”