Labor may have set the agenda for the campaign in recent weeks, but the government holds the whip hand due to a combination of factors. 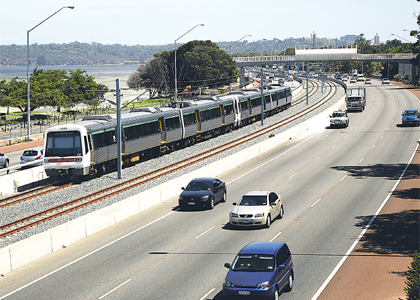 FRONT FOOT: Labor’s public transport push has set the agenda for the campaign and forced the government to make concessions. Photo: Jemma Howard

Labor may have set the agenda for the campaign in recent weeks, but the government holds the whip hand due to a combination of factors.

PREMIER Colin Barnett is poised to lead the Liberal-National alliance to a second term in power in Saturday’s general election. Don’t expect a uniform statewide swing to the two governing parties, however; rather, the result will be decided on a seat-by-seat basis.

Factors in Mr Barnett’s favour are that the Western Australian economy is considered to be in good shape, unemployment is the lowest of any state, his team has been scandal free, and has had only one term.

Voters rarely kick governments out after one term. And while Mr Barnett and his team have their critics, even among traditional supporters, they don’t seem upset enough to send the government packing.

Both sides have waged disciplined, carefully managed campaigns. And full marks to Labor for coming up with the issue that has dominated debate - the party’s push on public transport for the metropolitan area forced the Liberals to rejig their strategy.

While neither side’s transport policy is perfect, Mr Barnett would be well advised to take the Liberal light rail plan back to the experts to combine the best features of both strategies and produce a blueprint to meet Perth’s needs for the next 50 years.

Doing this could make the government vulnerable to charges of broken promises, but if it means coming up with a better integrated plan - similar to the vision shown by the Stephenson-Hepburn plan in 1955 - future Perth residents will be thankful.

The question needs to be asked, however, why it is that Labor, which came up with the major issue of the campaign, is it not in a winning position?

A key reason is the party’s poor showing in regional seats where, traditionally, it has been strong. Retiring Labor MPs, and the Royalties for Regions largesse promoted by the Nationals, have loosened Labor’s traditional grip on seats such as Kimberley and the Pilbara, and made it unlikely that the party will win back North-West Central.

Long-term Labor MPs Carol Martin and veteran Ton Stephens are retiring in Kimberley and Pilbara respectively, both seats which have done very well under the royalties scheme. The seats are considered likely to pass into conservative hands on Saturday.

Vince Catania, who won NorthWest Central for Labor last time, then defected to the Nationals, is tipped to withstand a spirited Labor challenge with the help of Liberal preferences.

The Nationals are also favoured in Kalgoorlie, once a Labor stronghold. Wendy Duncan is expected to make history and become the first National to win the Goldfields seat, helped by the retiring independent John Bowler, once a rusted-on Labor member.

It is symptomatic of Labor’s woes that the party has lost support in mining regions where once it was considered impregnable.

The Liberals are poised to win two metropolitan seats that have been held by independents - Sean L’Estrance replacing the retiring Liz Constable in Churchlands, and Dean Nalder running a strong campaign against Janet Woollard in Alfred Cove. The Liberals could also secure Labor-held seats such as Forrestfield and Balcatta.

In addition, Labor’s ‘flying postman’, Peter Watson, is under strong Liberal challenge in Albany, which he has held for 12 years; and the Liberals have been pouring huge resources into Labor’s Collie-Preston seat.

There will be some gains for Labor, however. Unions WA secretary Simone McGurk will win back Fremantle over independent Adele Carles, while it might be second time lucky for journalist Reece Whitby against Liberal MP Ian Britza in Morley.

So the Liberals could win up to 30 seats in the 59-seat Legislative Assembly. But Labor will be aiming to win enough to stay in touch for a rebound in 2017, and hoping the conservative alliance experiences a bad dose of the second-term blues.

THEIR membership might have fallen to less than 20 per cent of the workforce, but unions still have the capacity to embarrass Liberal premiers and, potentially, Labor prime ministers.

Take, for instance, the threat by WA nurses to strike if the state government continued to hold out on their pay demands.

The premier initially gave every indication he was taking a firm line, saying the caretaker convention that applied during election campaigns prevented his government from negotiating; the nurses would have to wait until after the election for a decision.

That seemed reasonable in the circumstances, but the Australian Nursing Federation upped the ante, painting a picture of members walking out of hospitals en masse, leaving patients to cope as best they could. Lives could be at risk.

So Mr Barnett and the government blinked, and a promise of a 14 per cent pay rise over three years was forthcoming if the government was returned. Labor’s Mark McGowan fell into line.

Not surprisingly the prison officers jumped on the bandwagon. It was too good an opportunity to lose over their pay claim, on the basis that if the premier could conclude a deal with the nurses, he could do the same for them.

The state’s prison officers don’t have quite the same clout in voter land as nurses, but their actions did put the premier on the spot, barely a week out from polling day.

Meanwhile, Prime Minister Julia Gillard needs all the friends she can get right now, and the WA members of the militant Maritime Union received a warm written message from the PM for their recent state conference.

“The MUA has been a voice for fairness and opportunity since 1872, and few unions have your amazing record of strength and solidarity in good times and in bad.”

The union and its forebears certainly had their origins in tough times.

But times change, and by the 1970s the Waterside Workers Federation, for example, was known as ‘the royal family of the workers’, so good were the ‘hard won’ conditions its members enjoyed.

But productivity was lagging, and this prompted the ugly confrontation on the waterfront during the Howard government’s days.

The MUA is not big on public relations.

So while conference delegates seized an intersection in Fremantle to highlight their case for a national stevedoring code of practice, it’s likely that many affected motorists were more than a little irritated.

That doesn’t worry the union, but it should be noted by the PM. She will need all the votes she can get come September.