SPECIAL REPORT: Contractors are buoyant despite the twin challenges of uncertainty around infrastructure spending and an employment market tipped to tighten. 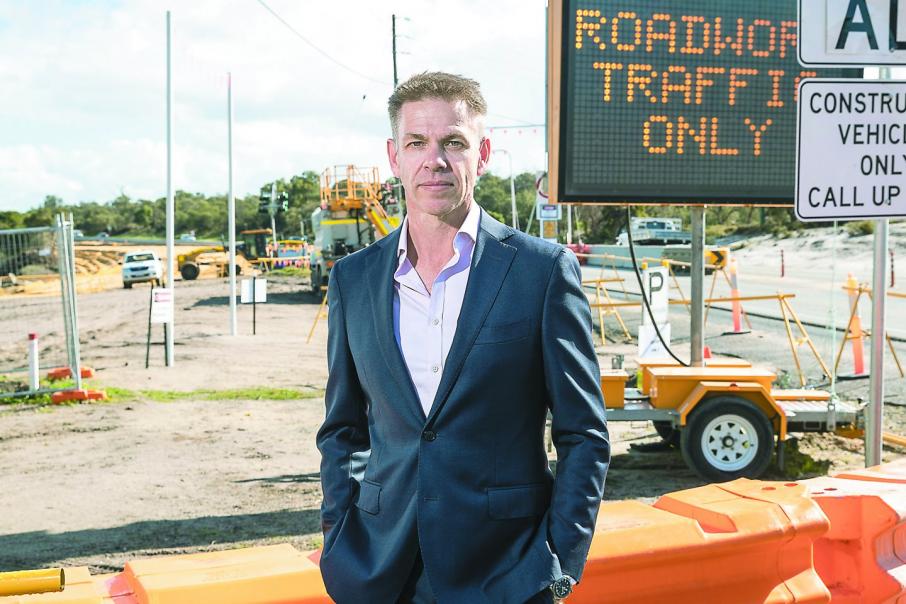 Jeff Miller is optimistic about the pipeline of work for contractors. Photo: Ryan Ammon

Sourcing workers for upcoming projects in Western Australia could soon become much more difficult due to a combination of factors from within the state and without, according to some experienced hands in the space.

One ingredient is that WA’s resources sector, which competes with infrastructure for the same labour pool, is building momentum.

A bigger issue will be the massive infrastructure packages in the eastern states, which caused an outflow of workers during the downturn.

Managing director of Osborne Park-based contractor Decmil, Scott Criddle, is among those who feel renewed strength coming into the workforce.

“There will be pressure on jobs probably by middle of next year ... massive tightening in the labour market” Mr Criddle told Business News.

“It’ll be more challenging in 12 months’ time to get good, competent, capable people in WA than what it was in the boom.

“The eastern states are so busy with infrastructure, like we’ve never seen before.

“That wasn’t there last time.

“WA is still a pretty tough market, a very competitive, challenging market, (but) I think it’s going to change.”

Westrac group manager of construction, Cameron Callaway, agreed it would be a challenge for contractors to source workers from interstate.

The business is part of Seven Group Holdings and  deals in yellow goods used by contractors.

“We’re a very trade-oriented business; now a lot of trades have moved east.

“Typically, in the prior boom we had a lot of Fifo people from the east.

“Thats now very difficult because of the volume of work in their own backyard.”

The figures show a 6 per cent lift in the number of employees at the top 10 contracting businesses (with public data) in the past 12 months, to 17,600.

Monadelphous and Downer are the two biggest players.

Among Monadelphous’s recent contract wins was its December deal for maintenance work at Synergy’s Muja coal power station in Collie.

Other players also added staff, with SNC Lavalin and AusGroup growing by 600 and 500 workers respectively.

Roads and schools are among the biggest drivers of tenders awarded by the state in the past 12 months. 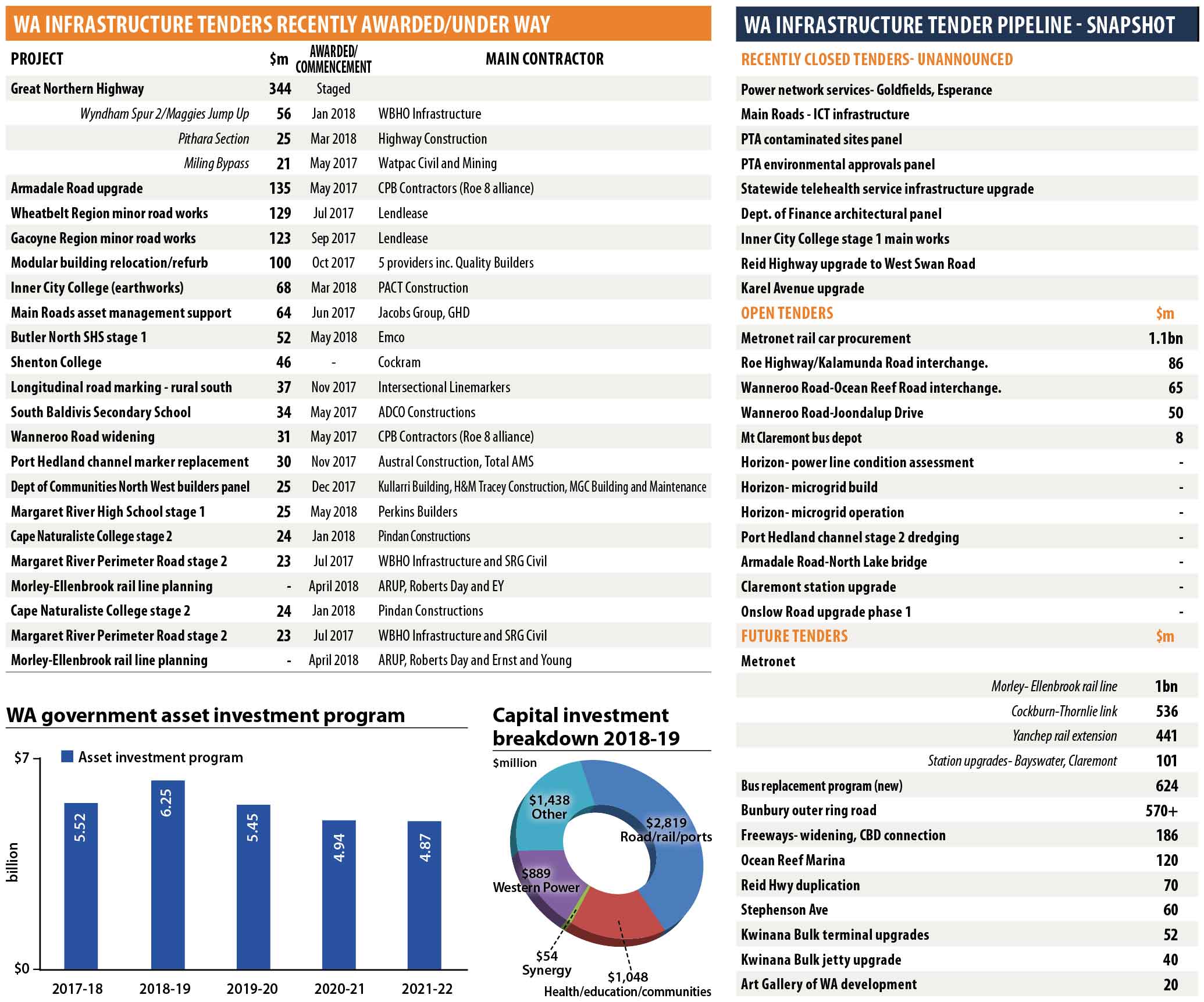 One of the bigger packages was awarded to the consortium that had previously been selected for Roe 8 stage one, an alliance led by CPB Contractors.

That included the $135 million upgrade of Armadale Road.

Lendlease secured two packages of minor road works in regional areas in the second half of 2017, worth $251 million.

Tendering for main works at that project recently closed.

The state government pledged $465 million towards schools upgrades and construction across the four years to 2021, with 11 schools to be built and 28 refurbished.

However, state budget figures suggest the public investment tap as a whole is being turned down a few notches.

The state plans to invest $21.5 billion in assets overall across the four years covered by the most recent budget, down on the $22.9 billion forecast in the four years following the 2017 budget.

On the flipside, some major projects not yet included in the budget have received commitments from the federal government, so are likely to proceed, including the Morley-Ellenbrook rail line.

Civil Contractors Federation chief executive Jeff Miller said he was encouraged by the pipeline of infrastructure work ahead.

Mr Miller told Business News it was normal for the budget to predict spending to tail-off in later years.

“We often see the (third) and last year of the forward estimates look pretty low until we move closer to those years,” he said.

“We always look at it with some concern, but it tends to sort itself out.”

A bigger problem was that departments would often underspend budgets, Mr Miller said.

CCF data shows Main Roads had budgeted to spend $1.5 billion in the 2018 financial year. However, more recent projections suggest it will come in at about $450 million below this figure.

The Public Transport Authority will be roughly $200 million below budget.

The Water Corporation and electricity utilities will be over budget by nearly $175 million, however.

But Mr Miller said it was generally not cost control reducing the spending.

(It’s) simply because projects are slowed up; the money is there but we’re not getting it out the door fast enough,” he said.

Another concern was that the government was favouring tendering for work in large packages, not breaking it into bits so smaller contractors could bid.

“There are complexities in the Thornlie to Cockburn line, because there’s an existing (freight) rail line,” Mr Miller said.

“It’s quite different to the challenges of a greenfields extension like Byford is, or Butler to Yanchep.”

Nonetheless, Metronet was a positive, Mr Miller said, as were the ongoing Northlink road projects.

Westrac’s Mr Calloway was optimistic the sector was heading in the right direction.

“There’s obviously some strength in the recent budget announcements with some good expenditure, both from state and federal government,” Mr Calloway said.

“Northlink project has been refreshing.

“We’ve got a lot of customers on (Northlink), from the majors down to smaller operators.”

Aside from the volume of projects, Mr Miller praised the forthcoming establishment of Infrastructure WA, an independent body to review infrastructure planning.

He said the state government’s industry participation strategy to support local contractors, moves to harmonise contracts and prequalification requirements across agencies, and security of payments reform to support subcontractors, were also positive steps.

Many WA-based contractors have made endeavours to diversify into the east coast infrastructure market in recent years as resources work slowed at home.

An example is Georgiou, which has won $216 million of work with NSW Roads across five projects.

The company’s office in NSW opened in 2015, Mr Georgiou said.

He said Queensland operations began in 2009 with a focus on energy, although the capability had since expanded to include roads.

The growth on the east timed well with the slowdown in WA, Mr Georgiou said, and gave WA employees development opportunities.

Monadelphous also has won work on the east coast.

Its Zenviron joint venture with Sydney-based ZEM Energy picked up a share of the $200 million Crudine Ridge wind farm build in NSW in May.

Zenviron was also awarded work at the Moorabool North wind farm in Victoria.

Decmil’s Mr Criddle said that business had also targeted opportunities in other states.

“We’ve certainly diversified away from WA, it’s been a lot more focus on Victoria, Queensland, NSW, even New Zealand, just so we have a countercyclical plan away from being located solely in WA,” he said.