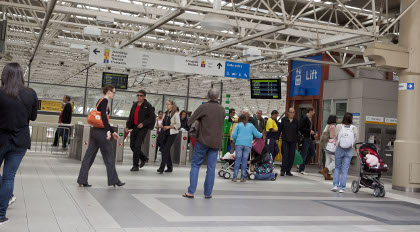 The state opposition says its ambitious Metronet rail plan would cost about $3.8 billion, about half the amount estimated by the state government.

Transport Minister Troy Buswell has urged the state's Labor Party for weeks to provide costings for the plan, which would bring rail lines to some of the city's most isolated suburbs including Ellenbrook on the northeastern fringes.

Mr McGowan said the Metronet project would include a 10.5km rail line to the international airport - and would serve domestic terminals when they are relocated to adjacent land in coming years - at an estimated cost of $731.5 million, not including rail cars.

He said the city needed a rail line to the airport to ease road congestion and provide better services for tourists and business travellers.

Under the proposal, the line to the airport will include new rail stations in the eastern suburbs of Redcliffe and Forrestfield/High Wycombe.

Opposition transport spokesman Ken Travers said the airport was "like a dam" to Perth's eastern foothills - something residents had to go around to reach the city.

Mr McGowan said the Labor Party - if it wins the state election on March 9 - would defer some projects proposed by the debt-laden government led by Colin Barnett to pay for Metronet.

He said the party had a track record of delivering rail projects in the state, referring to the Perth-Mandurah line, which was completed in 2007 under Alan Carpenter's leadership.

"We know what the Mandurah rail line cost, we have all of the evidence as to what this (Metronet) rail will cost, and we have done the work to ensure that it's affordable," Mr McGowan said.

"We know it has to happen."