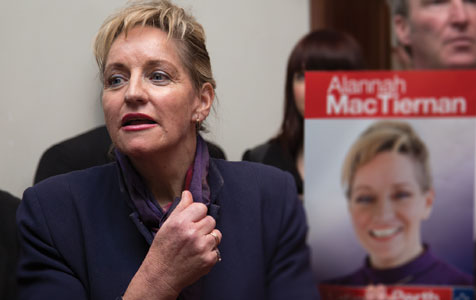 Labor’s Alannah MacTiernan has been urging the party to reform its candidate selection process for years, but her pleas have always fallen on deaf ears despite the steady decline in voter support.

The Labor and Liberal parties both suffered swings of about 5 per cent in Western Australia’s extraordinary half Senate by-election, but it is Labor that has most to lose if it fails to respond to the record low vote for its four-member ticket.

The two major parties polled just 55 per cent of the above-the-line vote, with Labor’s share standing at a dismal 21.8 per cent, assuring it of just one of the state’s six Senate seats.

The Greens and the Palmer United Party were the big winners. Together they polled about 28.5 per cent, serving notice that they could become major players on the federal and state political stages.

The Liberal slide was, to some extent, understandable.  By-elections tend to go against the government of the day, and the Liberals’ support at the federal election last September was close to maximum levels. But a 5.5 per cent drop in six months is cause for concern.

Certainly Prime Minister Tony Abbott didn’t help with his ham-fisted decision to restore knights and dames to the honours list, plus the clumsy debate over free speech.

And the opposition didn’t miss the opportunity to exploit the spectre of budget cuts in May.

Labor’s Alannah MacTiernan has been urging the party to reform its candidate selection process for years, but her pleas have always fallen on deaf ears despite the steady decline in voter support.

The party can no longer afford to ignore her calls, however.

WA Labor has been controlled in recent times by a cosy political cartel. The United Voice union from the left, and the Shop, Distributive and Allied Employees Association from the right have carved up the spoils – safe seats in the federal and state parliaments.

For example when Labor’s Senate leader, Chris Evans, retired from politics early last year, United Voice decided to recall its assistant federal secretary from Sydney, Sue Lines, to fill the vacancy. There was no party contest to assess the available talent for the job; United Voice decided the plum job would go to one of its own – and it did.

Similarly Joe Bullock decided that his predecessor at the SDAEA, Mark Bishop, should stand aside after 18 years in the Senate. That Senator Bishop wasn’t ready to go was a minor point. Mr Bullock blasted him out in a party number crunching exercise.

So Labor’s left filled one vacancy, and the right filled the other – power sharing at its best. But party rumblings started when Mr Bullock bumped Louise Pratt, from the left, down to the number two spot on the ballot.

Mr Bullock’s profile took an unfortunate election eve hit with the revelation of some careless comments at a private meeting last year in which he said he had not always voted Labor, criticised some party members, and took a jibe at Senator Pratt’s sexuality.

Post election, the party was looking for a scapegoat for its dismal showing, and it rounded on Mr Bullock. But he wasn’t the only problem.

What is undeniable is that the Labor ticket was weak. It lacked the qualifications of the Liberal team – even if the Liberals did have former lawyers in the top two positions – and it had no counter to the Greens’ Scott Ludlam, who projected a youthful, energetic and articulate image. Voters certainly thought so, rewarding the Greens with a record 16 per cent of the vote, including 23.8 per cent in the Labor stronghold of Fremantle, and 22.6 per cent in the blue ribbon Liberal seat of Curtin.

The Labor team was meant to fly below the radar. They certainly did last September, but were exposed in the election re-run. Their faces weren’t even on Labor’s how-to-vote cards, with images of Ms MacTiernan and Labor leader Bill Shorten there instead – only they weren’t candidates.

Labor must lift its game otherwise it will be lights out in the west.

The party has two of the smartest political operators in the game within its ranks in the form of Member for Brand Gary Gray (a former Labor national secretary), and retired minister Stephen Smith, who is a former state secretary. If their talents are ignored, then Labor is in more trouble than I think. Certainly the factional system that has run the party in recent years has been a dismal failure. It is discredited.

The Palmer United Party polled about 12.5 per cent of the list vote, and low-profile number one candidate Dio Wang is in the box seat for a Senate spot. And while party leader Clive Palmer made extravagant promises he can’t meet, almost 18 per cent of voters in Brand, and 14.5 per cent in Durack liked them.

Although voters agreed that the micro parties had nothing to offer, the case for reviewing the election process remains. But that won’t save Labor in future elections. Its reform must come from within.