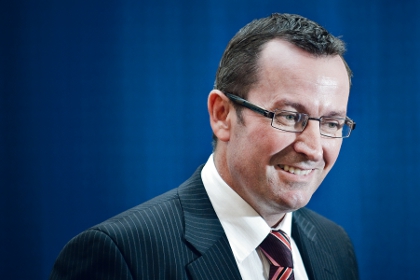 Opposition leader Mark McGowan has committed a future Labor goverment to work with the private sector to develop a 20-year infrastructure strategy for the state but the proposal has been rubbished by Premier Colin Barnett as "a glossy document".

Mr McGowan proposed the formation of an "apolitical, bipartisan" group, to devise a long-term infrastructure plan so that projects to meet the future needs of the state were pursued in a clear and targeted way.

The plan would form part of the package of policies the party would take to the state election in March 2013, Mr McGowan said.

Mr Barnett dismissed the plan as a bid to produce a glossy document.

"This government doesn't do that, we actually get on and make decisions and build projects," he told reporters.

"It's so much Labor: set up new bodies, new organisations, new committees, lots of plans, lots of glossy documents but not much action."

However Labor's proposal has won support from major business groups.

Mr McGowan said the new body would focus on significant, multi-billion dollar projects that would enhance the state's economic and social fabric, making the most of its economic boom and accounting for population growth.

Labor viewed the state's top infrastructure priorities as upgrades to Bunbury port in the state's south-west, more police facilities in the Perth metropolitan area and electricity infrastructure in the mining regions of the north-west.

The group would seek input from across the community including the public and private sectors, and its plan would be completely updated every five years.

There would also be a yearly update for minor infrastructure requirements, Mr McGowan said.

"That allows ... the business community who want to invest to actually see what the expectation is in terms of infrastructure over the next couple of decades," he told a business briefing in Perth.

He said the group would likely be chaired by a senior businessperson.

While candidates were yet to be decided upon, they would definitely not be a politician.

The new group would seek some funding for projects from the federal government's infrastructure advisory group Infrastructure Australia, while other project funding could also come from the state's regional royalties scheme.

It would not double-up on the state's existing submissions to Infrastructure Australia.

"The submissions that go to Infrastructure Australia are generated within the premier's office according to whim," Mr McGowan told reporters.

"What you've got to have is an actual plan that business knows is there and it can base its decisions around."

Chamber of Commerce and Industry of Western Australia chief executive James Pearson said Labor's plan was a good one.

"This allows for decision-making to be more transparent, ensures that infrastructure funding is allocated to projects that will deliver the greatest long term benefit and provides more certainty to the private sector on the priorities and timing of investments by government," Mr Pearson said in a statement.

"It’s vital we carefully plan for our future economic and social infrastructure needs, as WA’s population is expected to grow by 750,000 people within 15 years."

"CCI wants to see a broader State Plan - an over-arching document that brings together WA’s energy, water, economic and social infrastructure, as well as the workforce needs of the State.

"CCI calls on Government and the Opposition to give bi-partisan support for these initiatives, which will benefit households and business throughout the state."