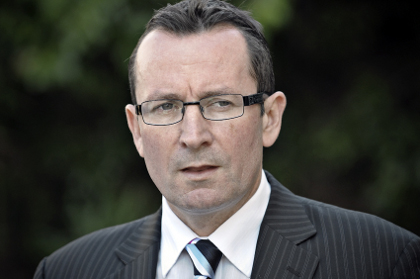 Labor's $3.4 billion Metronet rail project will be funded by relocating Perth's major stadium to Subiaco and scrapping state government funding earmarked for the mothballed Oakajee port project and a new museum in the city, the opposition says.

Opposition Leader Mark McGowan said $250-300 million could be saved by building the stadium at Kitchener Park instead of at Burswood, next to James Packer's Crown Casino.

Labor also wants to scrap $339 million that was put aside for the Oakajee port project in the state's Mid West region, which Japanese trading giant Mitsubishi indefinitely shelved in November.

The opposition's transport spokesman Ken Travers said Metronet would be paid for "by making the right decisions".

WA Labor leader Mark McGowan said $300 million would be saved by using a different location for the stadium, but Mr Travers put it at $250 million.

"We will deliver the same stadium in the same time frame and we will save $250 million to help fund Metronet," Mr Travers told an ABC Radio debate with Transport Minister Troy Buswell this afternoon.

the Burswood stadium option was far better and would be delivered by 2018, while the Subiaco plan would see construction complete two years later.

It would mean resuming 32 private properties in Subiaco, along with 66 public housing properties.

There were contamination problems at the Burswood site, but those issues were resolvable, he said.

At Burswood, there was room for an entertainment precinct to complement the stadium, which could be expanded.

A Subiaco stadium would only fit enough seats to cater to Perth's growing population for 10 years, he said, while the Liberal proposal was "for 50 years".

"They are going to squeeze a stadium into a heavily built-up area," Mr Barnett said.

"In one day, (Opposition Leader) Mark McGowan, who wants to be premier, has abandoned some of the most important projects in this state for one reason only: because his costings don't add up on his rail projects.

"That's why he made those decisions.

"Small thinking, panicked thinking, not a sign of a good government."

The Liberals have insisted Labor's rail plan will cost more like $6.4 billion - with the campaign for the March 9 state election so far dominated by both sides squabbling over how they reached their wildly differing figures.