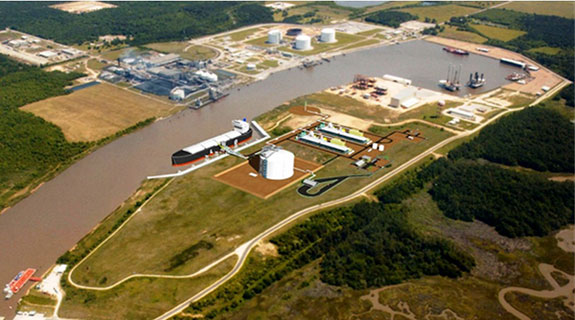 A conceptual design of LNG's proposed Magnolia project in Louisiana.

The company will issue 40 million shares to sophisticated and institutional investors at $4.35 a share, representing a 5 per cent discount to LNG’s five-day volume weighted average price.

Mr Brand said commencement of an early works expenditure program at the proposed 8 million tonnes per annum Magnolia project, located in Louisiana in the US, would comprise detailed engineering and ordering of long-lead equipment items to ramp up the site works schedule.

“Timing of the full early works expenditures is intended to align with the execution of binding offtake agreements for at least two LNG trains with a current design capacity of 4 million tonnes per annum, and the finalisation of pricing for the engineering, procurement and construction contract,” he said.

Mr Brand said the funds raised from the placement would also be used to progress the Bear Head project in Canada, which has a pipeline of infrastructure development work and front-end engineering design for a full 8mtpa export facility.

The company plans to reach a final investment decision on Bear Head next year.

Foster Stockbroking acted as sole lead manager to the placement.