The Business News annual export review has the latest data on 33 businesses representing $122 billion in outgoing trade. It also shows that while iron ore continues to dominate, the emergence of LNG, agriculture and services will benefit from a lower dollar. 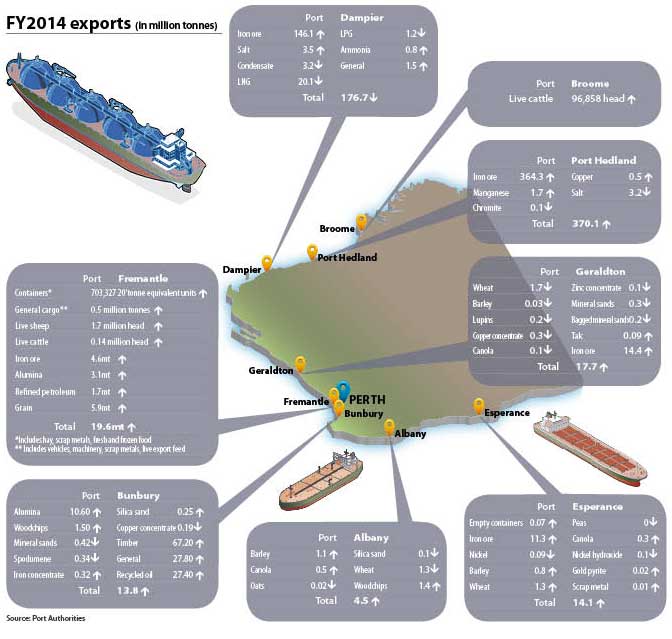 China's appetite for Western Australia’s iron ore has driven a decade of export growth that shows no sign of abating, as businesses behind LNG and agricultural commodities expand to take advantage of the next wave of demand.

Following a decade of almost continual year-on-year growth, WA’s exports have risen 24 per cent during the past 12 months despite falling iron ore prices in recent months.

Business News’ analysis indicates that Rio Tinto Iron Ore remains the state’s largest exporter, followed by BHP Billiton Iron Ore, based on revenue from WA exports, although BHP is bigger when its combined divisions in WA are brought together.

Last week, BHP Billiton said it would slash costs by 25 per cent in an attempt to knock Rio Tinto off its perch as cheapest iron ore producer in WA.Promises by both miners to vastly increase iron ore production, while containing costs, has set the stage for a battle next year for the ‘biggest exporter’ mantle, as several big LNG projects are constructed in the background.

In May, Rio Tinto announced it had reached its run rate of 290mtpa, ahead of schedule. It is working towards an expansion target of 360mtpa by the middle of next year. 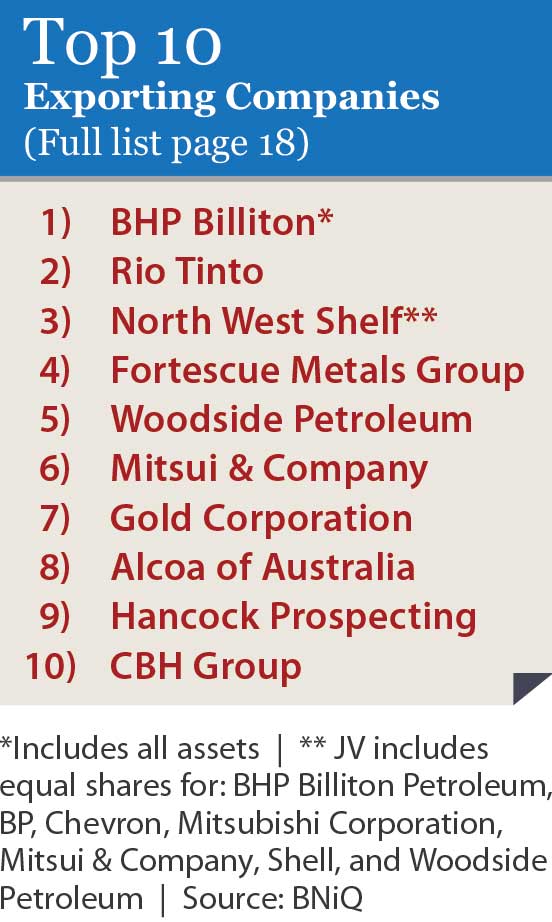 Economies of scale and productivity improvements are expected to significantly reduce unit costs for BHP Billiton, which in recent months has cut several hundred jobs from its Perth head office and operations across the state.

Some industry insiders believe this strategy, along with similar moves by Rio Tinto, is an aggressive attempt to push down prices and squeeze smaller players with higher costs out of the market.

“The booming exports market is a consequence of China’s appetite for our key commodities, but particularly iron ore. Of the $50 billion in exports since 2008-09, $49 billion of that almost entirely has been driven by iron ore demand from China,” Mr Nicolaou said.

However, Rio Tinto actually ships more iron ore due to a joint venture with Hancock Prospecting.

In other significant moves, Woodside Petroleum has risen one place to fifth largest exporter, closely followed by Mitsui & Company, which along with Woodside is a big investor in the North West Shelf, as well as Rio Tinto and BHP Billiton mines.

The success of these big players, as well as a drop in export revenue, pushed Gold Corporation down to seventh largest exporter.

The world’s fourth largest iron ore exporter, Fortescue Metals Group, which like Rio Tinto and BHP has been pursuing increased production, increased its export revenue by almost 43 per cent.

Chamber of Minerals and Energy of Western Australia economics and tax manager Shannon Burdeu told Business News that, while many people were aware WA’s resources sector was big, its impact on exports was often understated.

“The value of WA’s mineral and petroleum exports has now reached $121 billion, which is 20 per cent above the 2012-13 levels, so that’s still huge growth even though we’re seeing economic slowdown in certain sectors of the economy,” Ms Burdeu said.

“Irrespective of current market conditions, that’s something we do expect will continue.”

Iron ore prices dropped recently to below $US80/t, a five-year low and more than 40 per cent less than prices at the start of the year. 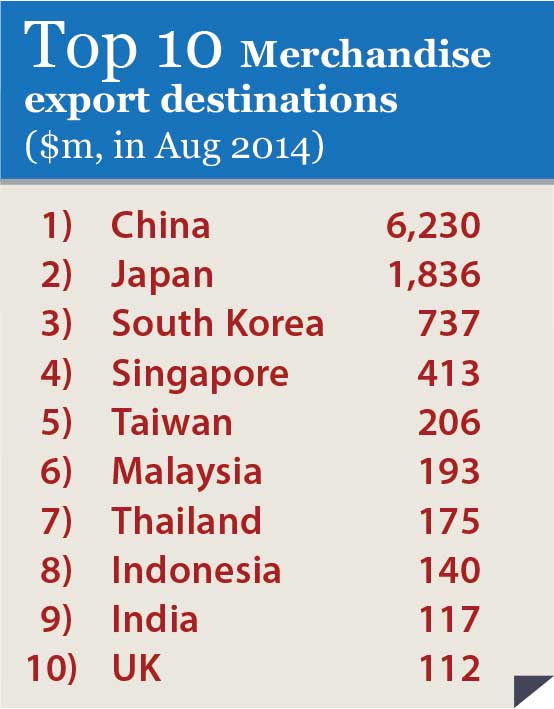 Mr Nicolaou said the state budget had typically benefited from high iron ore prices, but because treasury was so reliant on iron ore royalties, a falling commodity price had the potential to leave a big hole in the budget.

“If the current price was to be maintained iron ore royalties alone would be $2 billion lower than forecast at budget time just a few months ago,” Mr Nicolaou said.

“It is a major issue for the state government that its revenue base has become very volatile because of the iron ore price.”

In fact, for every $US1 per tonne decrease in the price of iron ore, the state loses $49 million, although this also works in the reverse, providing the budget a fillip when prices rise.

Even more important than the iron ore price is the value of the Australian dollar.

Bankwest chief economist Alan Langford told Business News that for every US1 cent change in the value of the Australian dollar the state government stood to lose (or gain, if the movement is up) $80 million through all mineral and petroleum royalties.

“If the dollar falls to 80 cents we do really well out of that, but if it stays somewhere high we don’t do so well,” Mr Langford said.

“Clearly we have a much bigger interest than any other state in where the dollar goes.”

Because the state has no control over volatile iron ore prices or the changing value of the Australian dollar, calls to redistribute the GST so WA, which is a large contributor but smaller receiver, have increased.

LNG exports, the next boom

Another growing sector that is expected to have a significant impact on the state’s export market and budget is liquefied natural gas.

As the state’s multi-billion dollar LNG projects come into operation in coming years, WA is expected to help propel Australia to the top of the list of the world’s LNG exporters.

While many of these LNG projects are offshore out of state waters, contributing to federal rather than state royalties, their impact on WA’s economy will be substantial.

“WA has been the leader in this for the rest of Australia; our exports, our economic growth has contributed to Australia’s economic growth, so irrespective of exactly where the revenue is going, there’s still corporate tax being paid, super, growth state product, GDP,” Ms Burdeu said.

The CCI expected exports to be a major growth driver for the state over the medium term, with LNG exports to make up a large portion.

“Seventy per cent of the growth in state’s economy will be driven by exports,” Mr Nicolaou said.

“A big part of that is the continued ramping up in terms of production in iron ore, but on the horizon is the shift to production from major LNG developments.

“That really will change the shape of our export picture for WA going forward. Iron ore will still be a dominant part of the state’s export story and so will China, but LNG exports will become a key part of the growth profile.”

It will also alter relationships with key trading partners, notably Japan, which was instrumental in setting up WA as an iron ore exporter, and is expected to become an integral gas buyer.

“Because of LNG our relationship with Japan will have almost a bit of a renaissance,” he said.

The latest figures reveal WA contributed almost half of all of Australia’s goods exported in 2013-14, more than New South Wales, Victoria and Queensland combined (38 per cent).

Mr Nicolaou said more than 50 per cent of WA’s total economic output comes from exports, compared with other states and countries where they represent 20 per cent or less.

“It’s probably the most distinguishing feature of WA’s economy relative to other advanced economies, that exports make up such a significant part of our economy,” he said.

However, the make up of WA’s exports, long dominated by resources, is changing.

While the potential for a low Australian dollar could be good for resources exports, it could also pave the way for a boom in other WA export areas such as agriculture and services.

“If the dollar stays at most 80 cents in the next two or three years, that’s going to be a huge boost to the competitiveness of education, of tourism and particularly agribusiness,” Mr Langford said.

“The next phase is going to be much more consumption of goods and services.”

Mr Langford said China and other Asian markets would continue to demand exports from Australia, this time more in the form of health, financial and professional services, as well as education.

Agriculture, which has long been a staple in WA’s economy, will also play a bigger role.