LNG sector opens up with Shell out

Shell’s move out of Woodside has opened up a range of scenarios as major players jostle for a stake of WA’s LNG riches. 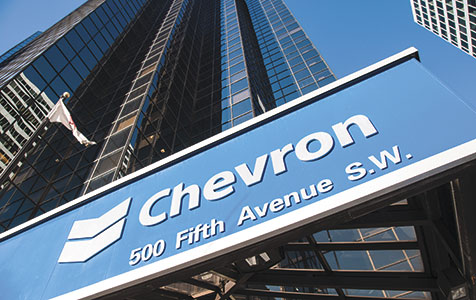 OPPORTUNITY: There’s speculation US giant Chevron may step in to fill the void in Woodside’s share register created by the imminent departure of Shell.

Shell’s move out of Woodside has opened up a range of scenarios as major players jostle for a stake of WA’s LNG riches.

If Europe’s biggest oil company, Royal Dutch Shell, was not acceptable to the Australian government as the owner of Woodside Petroleum, can we expect that the second biggest US oil company, Chevron Corporation, will be any more acceptable?

That’s a question no-one has asked yet, at least not publicly.

Look beneath the surface, however, and there are hints of a possible move by Chevron to fill the void in Woodside’s share register created by the imminent departure of Shell after decades as a frustrated minority investor.

Not only was Shell unable to dominate management at Australia’s biggest pure oil company, which it wanted to, it then suffered the indignity of being banned from buying Woodside because such a deal was deemed to not be in Australia’s national interest.

Chevron could suffer the same rebuff as Shell because the acquisition of Woodside would create a single dominant producer of LNG on Western Australia’s north-west coast, bringing together the existing North West Shelf project with the emerging Gorgon and Wheatstone projects.

In financial terms it would be a beautiful fit for Chevron, though perhaps a step too far for its US shareholders already grumbling about the massive cost overruns at Gorgon and heavy commitment to high-cost Australian LNG.

There’d also be concern in WA government ranks that a single company would effectively control the state’s important LNG industry.

Chevron, however, could argue that enormous synergy benefits would flow from Woodside becoming part of its LNG empire. It could also point out that it has been a player in WA’s energy scene longer than Woodside through its stake in the original WA oil exploration consortium, WA Petroleum (Wapet).

The biggest potential win is that access to additional gas reserves, coupled with Chevron’s LNG expertise, would lead to a rapid development of the second phase of the Pluto project, which should already be expanding if Woodside had been successful in finding enough gas, which it hasn’t.

Suggestions of a Chevron move on Woodside in its post-Shell period are circulating quietly in the financial community, largely because investment bankers would like to see Woodside’s share price move higher, and for a new management team to shake up a business that appears to have lost its drive.

Earlier this month Tom Elliott, the investment banker son of the legendary John Elliott who once led the Elders group when it tried to snatch control of BHP, nominated Chevron as a potential buyer of Woodside and even suggested a price of more than $50 a share as what would be required to succeed with a bid.

Mr Elliott’s rationale was based largely on the lacklustre growth outlook for Woodside, which has tried, and failed, to develop at least three new LNG projects, as well as failing to proceed with the second phase of Pluto.

In one investment-focused newsletter he was also critical of Woodside management noting that: “A management group that stands still for too long eventually gets replaced by a more aggressive competitor.”

Mr Elliott said Woodside faced a choice of either finding a new big project or returning surplus cash to shareholders, but if it chose to return the cash (which is essentially what’s happening with the buy-out of a large portion of Shell’s stake in the business), then it would “almost certainly become a takeover target”.

Along with Chevron as a potential bidder, Mr Elliott named BHP Billiton as possibly having an interest. Significantly, both Chevron and BHP Billiton are already shareholders in the North West Shelf project, but not of the Pluto project (which is Woodside’s cash cow).

Any move on Woodside by an existing player in the WA LNG industry will have heavy political implications at several levels.

Not only will the Australian government be concerned that it will be forced to make a decision similar to that presented by Shell’s attempt to acquire Woodside, the WA government will not like a major industry losing its competitive edge.

And even the Chinese and Japanese governments might have something to say, should a single US company control a major source of LNG.

If there is to be a move on Woodside by Chevron, BHP Billiton or another suitor, it will happen soon after Shell has officially left the scene. Once that happens, Woodside hunting season will be declared open.

SHORT-SELLING anything is always tricky because of the need to be confident that the price of an asset will fall, and the certainty that you can buy back when the price is close to the bottom – a situation THAT unquestionably exists today in the European common currency, the euro.

Evidence of a major slide in the value of the euro is evident seen across the continent, from the risk of the UK breaking up should Scotland opt to exit (which would add pressure on England opting out of the EU), to a fresh outbreak of anti-euro sentiment in Germany, the certainty of a Russian boot on gas supplies, minimal growth as recession stalks the region, and the slow disintegration of the French economy.

Most of those issues are reasonably well understood, but over the past two weeks the surprising return of the German desire to exit the euro was manifested in the election of an anti-euro business leader to the European Parliament, while the parlous state of France is to be seen in the equivalent of Britain’s 1979 ‘winter of discontent’.

Strikes by train drivers, air traffic controllers and shop assistants already have France in a downward spiral, with its all-important tourism industry feeling the squeeze as locals, visitors and export industries struggle to move around the country, or even get out of it.

Naturally, this is not investment advice, but if you’re looking for an asset to short-sell then it might be time to load up with euros.

HERE’S a number to contemplate. Teenagers in the US now spent 21 minutes a week watching broadcast television. Gone are the days of a zombie generation of young people glued to the box. Arriving is a generation addicted to smartphone and tablet technology, triggering this question how do advertisers reach the next generation if conventional TV is struggling to attract attention?