Woodside chief executive Peter Coleman told the LNG 18 conference in Perth today there could be opportunities for LNG producers to move further into downstream markets, particularly in developing countries, where demand for gas existed but barriers to entry had slowed take up. 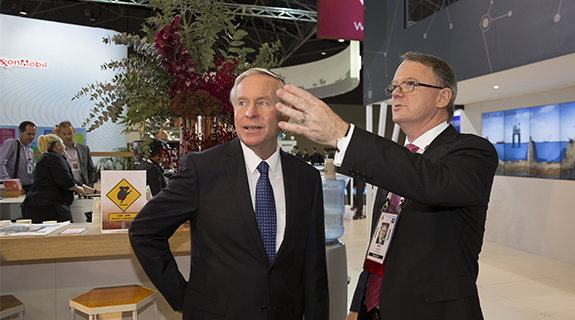 Woodside Petroleum chief executive Peter Coleman told the LNG 18 conference in Perth today there could be opportunities for LNG producers to move further into downstream markets, particularly in developing countries, where demand for gas existed but barriers to entry had slowed take up.

Floating regasification could provide a cheap entry point into new markets if the industry looked to venture beyond just selling at the border, Mr Coleman told today’s opening session of the LNG 18 conference.

Regasification is the process by which liquefied natural gas is transferred back to the gas form found in domestic use.

“The developing world want gas, they want access to it,” Mr Coleman said.

“The issues we’ve had has simply been being able to give them that access.”

That was because of the large terminals required to import gas, he said, and difficulty finding investment-grade counterparties with which to sign long-term contracts.

A further issue was the domestic distribution systems in destination markets.

“We need to think through as an industry how we actually move a little further into that market development,” Mr Coleman said.

“It's been fairly easy for us for a long time now to basically sell at the border, sell at the terminal.

There has been strong growth in the use of floating regasification terminals in the past decade, with their capacity up from 0.5 per cent of total global regasification capacity to nearly 9 per cent, according to the United States Energy Information Administration.

Shell chief executive Ben van Beurden said countries such as Germany and Japan were trying an alliance between renewables and coal to meet affordable energy needs while reducing emissions.

“It doesn’t work,” Mr van Beurden said at the opening session of the conference today.

“There’s probably good reasons for it, of course; renewables come at zero variable cost and if you look at coal compared to gas, certainly at the sort of prices we saw recently,you see the variable cost of coal being lower than gas as well.”

He said the market structure had not been thought through properly because they would not bring the benefits policymakers hoped for.

“So we have to work to a better structure and I think we have to make sure we properly price the externalities that coal bring,” Mr van Beurden said.

He said gas was the most natural ally for renewables in terms of flexibility and reliability.

To produce a given level of power, natural gas emits about half as much carbon as coal. Chevron chief executive John Watson said a growing global economy would mean all fuel forms were needed, and with the rise of the middle class in Asia, gas would be more than just a transition fuel.

He predicted the world would need a project the size of Gorgon every year for the next 20 years.

For Australia, however, the key would be to improve competitiveness by reducing costs in a way that didn’t affect safety or environmental standards.

“It's no secret that Australia’s costs are high, 40 per cent higher than the Gulf Coast of the United States,” Mr Watson said.

“It’s no secret that the productivity in building LNG projects isn’t what it will need to be going forward to attract additional capital.”

He said Chevron would work with contractors, labour and governments to ensure the industry was competitive in Australia.

Between them, the Gorgon and Wheatstone LNG projects would contribute a trillion dollars to national GDP, Mr Watson said. Premier Colin Barnett gets up close with a koala (photo: Attila Csaszar).

In his speech to the conference, Premier Colin Barnett said there were lessons to be learned from the recent boom, while he defended the domestic gas reservation policy.

“The sheer scale and cost of LNG projects means they have a major impact wherever they are built,” he said.

“This is particularly the case in a first world nation such as Australia.”

“If Australia is a lab test on technology, it is equally a case study on economic, environmental and social policy.

Mr Barnett said it was no longer sufficient merely to say projects were beneficial for the economy; greater effort was needed to counter anti-development voices

Domestic gas was one such example of government and industry successfully getting the public onside, Mr Barnett said, arguing it was part of the reason LNG had such strong community support in Western Australia compared with Queensland.

Public support for projects, he said, was part dependent on tangible benefits to the local economy, with tax revenue not enough in itself.

“The Commonwealth government regards this (domestic gas reservation) as an unjustified interference in the market,” Mr Barnett said in defence of the policy.

“I’m sure the industry agrees, but I don’t.”

A further issue on the east coast was that suppliers were buying additional gas to meet export contracts, creating a local shortfall.

“Too easily a protest movement can gain a stature that was never anticipated by the companies,” Mr Barnett said.

“Farmers, with their legitimate concerns over groundwater, staged an effective ‘shut the gate’ campaign against coal seam gas.

“Without the countervailing benefits case, both the New South Wales and Victorian governments imposed a ban on further gas exploration.

“The situation is now in a stalemate.

“The failing was to not make a case for gas or to back it up with tangible evidence.”

Mr Barnett said gas should have a bigger role in Australian electricity production, although he didn’t rule out an eventual expansion of the Collie coal-fired power plant.

“For Australia, coal dominates, accounting for 61 per cent of power generation,” he said.

“Gas accounts for just 22 per cent.

“Surely the easiest and least costly way to reduce greenhouse emissions is to require that most new and replacement power generation is based on gas?”

That makes Woodside an early adopter of LNG as a marine fuel in the region, according to chief operations officer Mike Utsler.

“We’re thrilled to be the first company to bring one of these vessels to the southern hemisphere," he said.

"Australia is on track to become the world’s largest producer of LNG, so it makes perfect sense to build dual-fuel capabilities for our marine fleets here.

“Our LNG tankers use their cargo to power their engines, making them cleaner vessels that use less diesel.

"It’s natural that we progress this capability through to our support vessels."