LNG oversupply could lead to ‘blood on the battlefield’

The global LNG market could soon be in sharp oversupply, with Australia contributing about a third of that excess in what will become a buyers’ paradise, an international expert says. 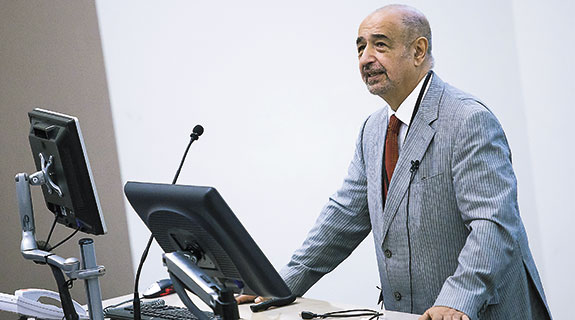 The global LNG market could soon be in sharp oversupply, with Australia contributing about a third of that excess in what will become a buyers’ paradise.

Spot prices for liquefied natural gas could fall dramatically over the next two or three years as a 100 million tonnes a year oversupply washes over the market, according to energy consultant Fereidun Fesharaki.

Dr Fesharaki, who has led his own consulting firm for more than three decades, made the comments at the International Association for Energy Economics Asian conference hosted at the University of Western Australia.

A key driver of his case, Dr Fesharaki said, was that although the vast majority of LNG due to come on-stream was currently contracted, most of those contracts were not to end users.

Instead, a large portion was to companies that built production portfolios to deliver to clients, acting as intermediaries, some of which would not have buyers for all of their gas available.

That would then be dumped on to the spot market, leading to a substantial fall in world prices.

Dr Fesharaki estimated that almost 60 per cent of volume under construction in the US was not contracted to end users, up to 40mmt per annum.

Australia’s excess would range from 25mt to 32mt.

Dr Fesharaki did not expect demand side growth to have much impact in absorbing the excess production.

Demand in the Japanese market was declining, he said, as it was in South Korea, while China was flat.

There was modest growth in India.

“Very bad things will happen in the next two or three years,” Dr Fesharaki said.

“In this market, something has to give.

“Until you get to the late 2020s you won’t have any kind of supply issues.”

With such large quantities to be dumped in the spot market, the year-average LNG spot price for 2018 could be around $6 per million British thermal units, with a low point possibly of $3/mmBtu or less.

Long-term contract prices could be around $8/mmBtu.

A merged Shell and BG would be hit the hardest, Dr Fesharaki told the conference, due to its large gas portfolio, while the European market would not offer much relief.

“Everybody says ‘I’ll just go and park my car (in Europe) until a better time comes’,” he said.

But he cautioned that LNG cargoes would simply be unable to compete with Russian giant Gazprom, which has a very low cost of production.

Ultimately, this would mean there was some reluctance on final investment decisions, and some projects could either be mothballed or would lose money.

“There is going to be blood on the battlefield,” Dr Fesharaki said.

Australia’s next likely major project, Woodside Petroleum’s Browse FLNG, would be unlikely to be started in a hurry, he said.

Woodside took a $1.1 billion impairment for the 2015 year, reducing net profit after tax to just $26 million, with the company consequently reducing its dividend.

Unveiling the results, Woodside chief executive Peter Coleman said the company was yet to land a contract for Browse gas sales.

“That said, the value enhancement delivered is mostly being offset by the current lower oil price environment, and the joint venture will work together through this year to work towards a decision on Browse.”

Dr Fesharaki was more bullish when it came to the price of oil, which he saw turning back towards $US80 per barrel over time.

He said there would be a 500,000 to 1 million barrels per day decline in production this year, while demand growth would be 1.2mbpd.

Over a five-year period, that would amount to about 6mbpd of increased demand, with Dr Fesharaki unable to find more than 3mbpd or 3.5mbpd to satisfy the increase.

Additionally, OPEC would eventually be lured back into an interventionist strategy and cutting production in the next 12 to 18 months.