A report from consultants Wood Mackenzie to be released at today’s Australian Petroleum Production & Exploration Association conference predicts further delays to the start of production for the state’s new LNG projects, including Gorgon trains 2 and 3. 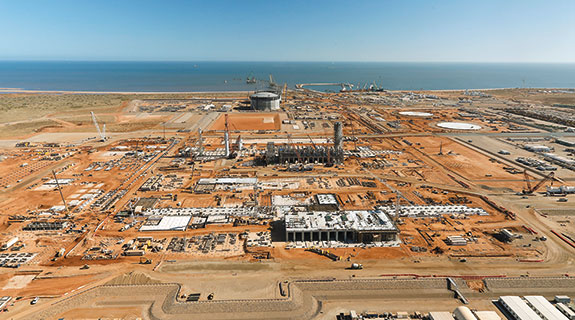 Chevron's Wheatstone during its construction.

A report from consultants Wood Mackenzie to be released at today’s Australian Petroleum Production & Exploration Association conference predicts further delays to the start of production for the state’s new LNG projects, including Gorgon trains 2 and 3.

Across the period of 2015-2019, total production would be around 11 million tonnes lower than forecast six months ago because of the hold ups, the advisory said.

The report anticipates delays to the Gorgon and Wheatstone projects, including lags of up to nine months between the second and third trains, as opposed to the six initially assumed.

First gas will be delivered by December, while full capacity will be achieved as far off as late 2018.

Wood Mackenzie said the focus of activity on the first train had indicated that there would be a delay on the other two trains.

The first trains at Inpex's Ichthys and Shell's Prelude are predicted to be running by late 2017, while Wheatstone is anticipated to deliver its first load of LNG by mid-2017, later than Chevron’s target at the end of 2016.

None of those three projects has yet had formal cost reviews, and the report predicts some overruns, but not of the scale of Gorgon.

A weaker labour market and softer exchange rate will help keep costs from blowing out as substantially.

The report contrasted the delays with the successful start up of the Queensland Curtis LNG project, noting that other coal seam gas operations also seemed likely to start on time.

Meanwhile, Accenture suggests the LNG industry will contribute $55 billion to Australia’s GDP by 2020, although some hurdles must be overcome for the industry to achieve its potential.

It found competitiveness, the industrial relations system and the industry’s regulatory framework all needed improvements for Australia to be a global leader in LNG.

“If Australia gets the transition right and implements the recommendations described herein, over the next 25 years, in addition to the more than $450 billion of ongoing investment, there is an opportunity to create an estimated additional $50 billion to $70 billion of shareholder value for companies,” Accenture said.

Key recommendations in the report were: accelerating training and building workforce experience; incorporating lessons learned from the construction phase and leveraging leading international practices; developing a more collaborative and integrated industry and increasing infrastructure sharing; building on innovation; and continuing to automate and digitise.

Appea acting chief executive Paul Fennelly said it would be imperative that operations, equipment, workforce, the regulatory framework and the industrial relations regime were ready as the sector entered its next phase.

“Australia has a real opportunity to use the next few years to become a world leading LNG producer, delivering long-term returns for all industry sectors,” he said.

“The construction phase has now peaked, and the industry is transitioning into an exciting new production and operation phase - an estimated 13 new LNG trains within seven new plants will come online between 2015 and 2018.”