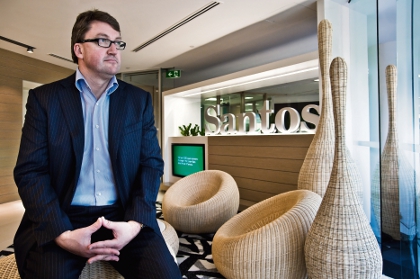 Santos' WA vice president John Anderson said the company would look at the possibility of a floating facility to process gas from Caldita Barossa.

Under terms of an agreement announced today, SK will earn a 37.5 per cent interest in the Caldita and Barossa gas fields, in return for $US520 million in development funding, with ConocoPhillips remaining as operator of both permits.

ConocoPhillips will retain a 37.5 per cent stake in the discoveries, while Santos' interest will be reduced to 25 per cent.

SK will fund the first $US260 million of a three-well appraisal program expected to begin next year, $US90 million of front end engineering and design activities and pay $US110 million upon meeting certain production milestones, Santos said.

Following completion of the appraisal program, SK will have the option to increase its stake to 49.5 per cent, with Santos' interest falling to 20.2 per cent, and ConocoPhillips' to 30.3 per cent.

Santos chief executive David Knox said he was pleased to have reached an agreement to progress the commercialisation of the Caldita and Barossa fields.

“Today’s agreement is another demonstration of the value inherent in Santos’ portfolio and is consistent with our strategy of building strategic partnerships to commercialise assets,” Mr Knox said in a statement.

Santtos vice president WA and NT, John Anderson, said the company was assessing its options for the processing of gas from Caldita Barossa.

“We will look at the option of floating LNG as well as the possibility of a tie-back development to our existing LNG plant at Darwin, either as an expansion of those facilities, the back-filling of Bayu Undan when it comes off plateau or a combination of both.”