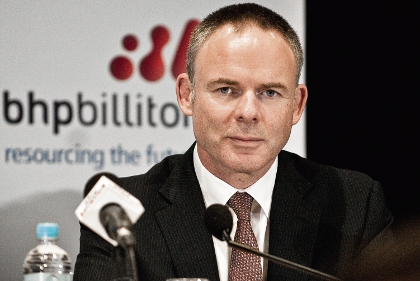 BHP Billiton chief executive Marius Kloppers has agreed to forgo his annual bonus after announcing US$3.29 billion in write-downs, mostly on one of its American shale gas assets but also its Nickel West business in Western Australia.

Its Fayetteville shale gas assets, which it bought from Chesapeake Energy in February 2011 for US$4.75 billion, have been written down by $US2.84 billion.

But BHP has not adjusted the value of its shale liquids and gas assets in Texas and Louisiana acquired through Petrohawk Energy in August 2011 for US$12.1 billion.

“The development of these assets is expected to create substantial, long term shareholder value,” the company said in a statement.

The second write-down was a US450 million charge on its WA nickel assets.

BHP blamed margin deterioration for the nickel write-downs, with the price down and costs rising.

The shale gas write-down was largely expected, because a surge in US gas production has led to a slump in prices.

Mr Kloppers said that as well as low prices, the impairment charge reflected the company's decision to adjust its development plans by shifting drilling from dry gas to the more liquids-rich fields.

"While we have responded appropriately to the changed market conditions, today's impairment is clearly disappointing," he said in a statement.

“Our decision to enter the North American shale hydrocarbon business about 18 months ago was taken after extensive deliberation and due diligence.

“Our work convinced us that this significant, low-carbon fuel source would play a meaningful role as the world makes its future energy choices.

“We are still of this view, particularly given the ongoing positive technological advancements in the shale industry.

"We believe that our dry gas assets are well positioned for the future given their competitive position on the industry cost curve.

“In the short term, the accelerated development of our liquids rich shales will continue to complement investment in our traditional project pipeline given the high rates of return on offer and the rapid payback on incremental investment.”

“We are fortunate to have Marius’ leadership, together with a strong management team supporting him, in these challenging times,” Mr Nasser said.

“Notwithstanding the prevailing environment we are confident in the outlook for the United States natural gas market and the role our shale assets will play in BHP Billiton’s portfolio in continuing to deliver long term shareholder returns,”

Mr Nasser added “it is very disappointing that low US gas prices have impacted the carrying value of the Fayetteville assets”.

The company said the annual review of its non-current assets will be finalised in conjunction with the financial results to be released on 22 August 2012.

Its shares slumped as much as 81 cents today to $31.21 before recovering slightly.