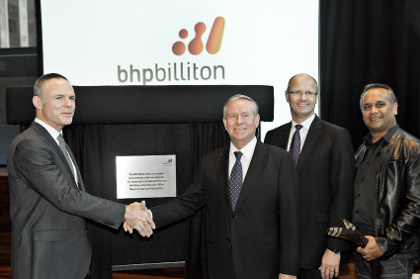 BHP Billiton chief executive Marius Kloppers has defended the global mining giant’s track record, saying it has outperformed its peers over the past six months, as rumours spread of BHP contractors laying off staff and putting project work on hold.

The official opening of the company’s new Perth office, which is home to 3,000 staff, has coincided with speculation that some of its multi-bilion dollar growth projects, including its Port Hedland outer harbor development and its Olympic Dam mine in South Australia, will not proceed.

“I hope not” Mr Kloppers said, when asked if today’s event symbolized the peak in the company’s growth program.

With BHP’s annual results due to be released this month, Mr Kloppers was constrained from talking in detail on the group’s growth plans, but he did offer a few comments.

“Over the past decade, we have invested some $27 billion in growth projects here in Western Australia and we have significant plans for growth in the future,” he told the official opening.

Mr Kloppers later told journalists there had not been any significant shift in the past six months in BHP’s view about global growth or the outlook for commodity markets.

“I don’t think our outlook has changed very much in the past six of seven months.

“We signaled a note of caution through the latter part of last year.

“What we really look at is, where does the long-term demand take us? Our view on that hasn’t really changed. There has been no real change in that long-term picture.”

He said BHP currently had about $30 billion of growth projects in the execution phase.

When asked if he felt under pressure, Mr Kloppers said BHP had done better than its peers, which would include Rio Tinto.

“If I look at our company’s share price and I look at our peer group, our strategy, our diversified offering, has made us outperform all of our peer companies in the sector, particularly over the last six months as people have become more risk averse.

“That, for me, is what we work for every day, to provide our shareholders with superior outcomes.”

Speaking at the official opening, Mr Kloppers said the 47-level building was a “clear demonstration of our long-term commitment to the community of Perth and Western Australia”.

“For the first time, we have more than 3,000 employees from each of our Perth-based businesses – nickel and aluminium, petroleum and iron ore – working together in the one central location.”

This is the largest grouping of BHP employees in a single building anywhere in the world.

The new building will also house BHP’s integrated remote operations centre (IROC), which will support the automation of its iron ore business.

The 3,000 office staff at the Brookfield Place building are among 24,000 employees and contractors working for BHP in WA.

The WA employees constitute about one quarter of the group’s global head count.

When asked if BHP might shift its head office to Perth, Mr Kloppers acknowledged it was important for the company to be based in Australia, close to most of its assets, but felt the particular city was less significant.

He said BHP only has about 300 head office staff, much less than its Perth total.