A creative arts Perth business with Aboriginal links has attracted the attention of more than 40 US editors and influential businesspeople, including editors at Vogue and Oprah Winfrey’s magazine, within a month of opening shop. 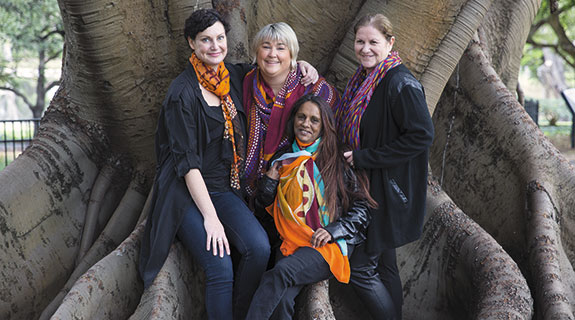 A creative arts Perth business with Aboriginal links has attracted the attention of more than 40 US editors and influential businesspeople, including editors at Vogue and Oprah Winfrey’s magazine, within a month of opening shop.

Started by businesswoman Amanda Healy and her creative director Karen Djordjevic, the Perth-based business Kirrikin uses digital printing to translate Aboriginal artwork on to silk and cashmere fabrics made into scarves, neck ties and pocket squares.

Kirrikin, which roughly translates as ‘your Sunday best’, is aimed at the luxury Australian and overseas markets.

Ms Djordjevic told Business News early feedback from influential US publishers and marketers had reassured her and Ms Healy that their products had international appeal.

“The email I got from my publicist gave me goose bumps. Everyone was blown away, they’ve never seen anything like it, they thought it was an amazing concept, including the sustainability of it,” Ms Djordjevic said.

Ms Healy said the driving forces for starting Kirrikin were to create a business that made fashions from genuine indigenous art, to do it all within Australia, and to provide a sustainable income for Aboriginal artists – all things she said had not been done well in combination before.

“There is not much on the market that is not made entirely offshore. Even then, they are made with non-authentic artworks, and on really poor quality fabric,” Ms Healy said.

Ms Djordjevic said the business also wanted to make Kirrikin as scalable and commercial as possible, in direct contrast to her experience with a separate accessories range she designs called Coyaba, which creates unique items from one-off fabrics.

“Coyaba was very limited because of the fabrics I used ... so that’s where with Kirrikin we want a product that is commercial, that we can sell worldwide,” she said.

Kirrikin pays each of its six Aboriginal artists a percentage of each product sold.

“They can live on their land ... and have a sustainable income and that money filters back through to Aboriginal communities.

“This is the funny thing; with most of the artists, it’s a dream that they’ve always had, they’ve wanted to see their artwork on fabric and people wearing it and they’ve never had that opportunity.”

In the hopes of securing international contracts and bulk orders from overseas, particularly in China and the US, Kirrikin recently brought in the services of Perth-based advisory firm GCM Advisory, which works with a number of Aboriginal businesses, including the Western Australian Aboriginal Tourism Operators Council.

Kirrikin has also been in discussion with G’Day USA organisers.