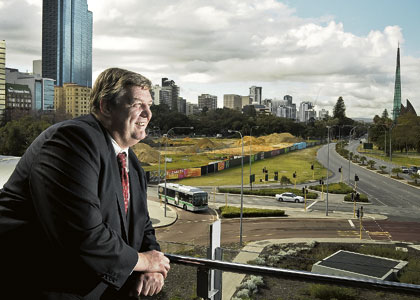 KIERAN Kinsella has taken on the lead role at the Metropolitan Redevelopment Authority at a time of major, and sometimes controversial, activity in Perth.

The MRA has several high-profile projects on its books including Elizabeth Quay, Perth City Link, and Riverside, as well as smaller projects in Armadale, Midland and Subiaco, and the Perth community is pinning its hopes for civic rejuvenation on these developments.

The Elizabeth Quay and City Link projects have a total combined cost of $7.8 billion, but Mr Kinsella takes the responsibility in his stride.

“There are high expectations but that is the challenge for the team. It is a matter of taking it day by day,” Mr Kinsella told WA Business News.

Mr Kinsella has been in the role for eight weeks, taking over from MRA interim chief executive Tony Morgan, who was formerly the head of the East Perth Redevelopment Authority.

Mr Kinsella is charged with bringing a fresh perspective to the MRA, while at the same time overseeing projects that are the culmination of strategic planning processes that have been under way for 10 to 15 years.

“The vision has been painted, but there are bits and pieces along the way that we have to make decisions about all the time,” he said.

“I want to stay true to the original concept and vision, but as the projects roll out there are decisions that need to be taken on a day-to-day basis and the total impact of those decisions can have quite an impact on the final outcome and delivery of the project.

“I am not about changing the world, I am about delivering what we have been asked to deliver.”

Elizabeth Quay’s publicly funded component is set for completion in 2015, and will be followed by the commercial, retail and residential developments by the private sector that will skirt the civic boulevard area.

Various state governments have talked about developing the 10 hectares of riverfront land between William and Barrack streets, and all proposals have attracted plenty of debate and degrees of opposition.

When the Barnett government announced it would go ahead with development of the site in 2011, however, these opponents ramped up the rhetoric.

Mr Kinsella believes that, as time goes on and progress is made at the site, the pessimists will be won over. And those who still think the project may yet be shelved are mistaken.

“This is a major regeneration opportunity for Perth … the cabinet and state government have decided they will proceed, and after 20 years of different plans the government has made the decision; they have invested in the project,” Mr Kinsella said.

“We are going to be building such a great place and when it comes to life, people will come … the elements that go together that bring the city to the river, the public spaces, the restaurants, the cafes, they will be irresistible to people.

“I am very confident the project will win over the great majority of people.”

Mr Kinsella has had a long career in community development and planning, with his first role in the sector at the Gascoyne Development Commission and subsequent roles at Tourism WA, the Indigenous Land Council and the Department of Housing.

Other experience includes a 12-year stint heading up the Midland Redevelopment Authority, prior to its amalgamation with the East Perth, Subiaco and the Armadale redevelopment authorities to form the MRA.

He refers to Elizabeth Quay and Perth City Link as the “headline acts of the MRA’s portfolio”, but said regeneration projects in suburban areas remained equally important.

“I am very keen to make sure our legacy projects are completed and we put the same energy into our legacy projects as we do to our new projects at Elizabeth Quay and that the communities at Subiaco, Midland and Armadale feel that we are just as much a part of their community today as we were a year ago,” Mr Kinsella said.