Overseas and interstate retailers are lining up to be part of an emerging new precinct in the Perth CBD. 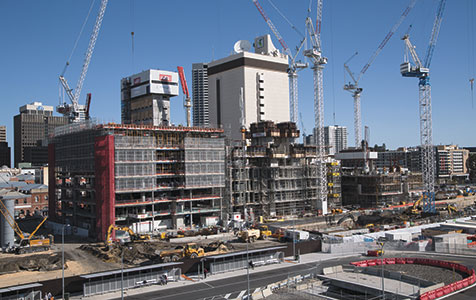 Overseas and interstate retailers are lining up to be part of an emerging new precinct in the Perth CBD.

Leighton Properties’ Kings Square has been hailed as a game-changer for the Perth CBD, with new outlets forecast to boost retail spending by more than $100 million once the precinct opens in 2015.

Research released by Urbis earlier this year estimated total retail spending at the Kings Square precinct in 2015 would be around $110 million.

The precinct currently comprises five office towers, four of which are under construction, while the Metropolitan Redevelopment Authority launched an expressions-of-interest campaign for a hotel development adjacent to the site earlier this month.

Major retail and services tenants already signed up at Kings Square include Buggles Childcare Centre, a 24-hour Surge Health and Fitness gym, and a tavern run by prominent hospitality firm Gastevski Group, which operates the Grand Bar and Bistro at Central Park and the Whale + Ale tavern in Ocean Keys.

Commercial tenants at Kings Square include Shell, John Holland and HBF, while Urbis said 1,130 residents and 4,550 workers were located within 500 metres of the precinct.

Lease Equity, in collaboration with Metier, is running the retail leasing campaign at Kings Square.

Metier chief executive Darryl Ashworth said about 60 per cent of the tenancies on offer had already been pre-committed.

All tenancies are likely to be taken-up the end of the year, he said, with a large proportion of them being unique food and beverage outlets.

“We are doing deals with a whole range of groups not only from Perth but from Melbourne and Sydney and overseas, therefore we are bringing operators that will be new to Perth,” Mr Ashworth told Business News.

“That will complement the deep fabric of food and beverage that we’ve been able to create in the city over the past few years.”

Mr Ashworth said Leighton’s development of Kings Square as an entire precinct at once would enhance its unique offering.

“The CBD thus far has grown organically building by building,” he said.

“By creating four very large buildings with new streets and laneways, it affords the ability to have retail that all has its individual presence on the street.

“It’s recognisable, it’s easy to get to and it’s visible, therefore its opportunity to survive and succeed is greatly enhanced.”

Colliers International manager of retail sales and leasing, Ben Tana, said Kings Square would also have a beneficial flow-on effect to nearby retail precincts at 140 William and Raine Square, which had failed to gain the traction that their respective developers would have liked in the retail space.

“It will strengthen Murray Street and Wellington Street and change the dynamics down there,” Mr Tana said.

“You’ve also got the Perth Arena nearby, so it’s poised to become a really good area.”

Mr Tana said the Kings Square precinct was an indication how the dynamic of the CBD was being continually altered by new developments.

“The Barrack Street end has taken a bit over the hit over the last five to 10 years with developments on the western end of the city,” he said.

“The city has changed a lot over those years, so Kings Square will be a bonus.

“Linking Northbridge to the city is obviously the whole aim of this, and this is going to open up opportunity for some exciting new retailers.”