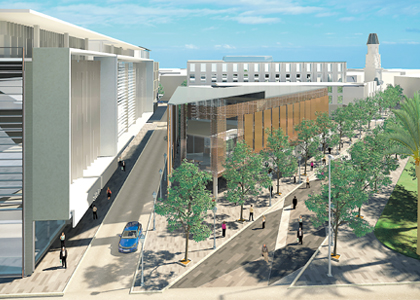 A PROPOSAL to revamp the centre of Fremantle is a step closer to becoming reality following the release of a plan for the city’s Kings Square redevelopment project.

The plan will go before the public for a period of eight weeks and is expected to be formally adopted by the council in January, paving the way for the City of Fremantle and proposed partner Sirona Capital to sign binding contracts for the redevelopment.

Sirona managing director Matthew McNeilly told WA Business News the redevelopment was long overdue and that he was hopeful the proposed deal with the city would be realised.

“It’s fairly obvious that Kings Square is in need of a revamp and I think it’s very important,” he said.

“It’s almost a game-changer for Fremantle as a whole.”

A key focus of the Kings Square redevelopment will be the Myer building, which Sirona bought from besieged developer Luke Saraceni in October last year.

Myer announced in September that it would close its Fremantle store early next year, after it had operated below potential for a number of years.

Mr McNeilly said that, rather than attempting to secure another major retail tenant in place of Myer, Sirona would take a different approach to the four-storey building.

“We’re repositioning it to essentially be predominantly office space with retail at ground level and also in the basement,” he said.

“We’ve had discussions with tenants over all of the space. There is veiy strong interest.”

Mr McNeilly also dismissed media reports that Mr Saraceni had negotiated a future role as property manager in the sale of the Myer building to Sirona.

“Past reports haven’t necessarily been an accurate reflection of what goes on,” Mr McNeilly said.

“We do and have used Luke’s group, not Luke specifically, for some planning advice in the past and may well continue to do so going forward but this is a Sirona deal.”

A number of city owned sites will also be redesigned under the plan, including the Queensgate Centre, council offices and library.

A financial assessment of the project identified a positive net present value of $4.5 million and an internal rate of return of 6 per cent for the base case scenario.

The release of the Kings Square plan comes as the state government approved an amendment to the city’s planning scheme, which will allow a number of central sites to be substantially redeveloped to attract greater commercial investment.

The city is aiming to create an additional 20,000 square metres of retail area and 70,000sqm of office space across Fremantle in its bid to attract more people to live and work in the city.

Fremantle mayor Brad Pettitt said the amendment would enable a scale of revitalisation not seen in the Fremantle city centre since the America’s Cup days of the mid to late 1980s.