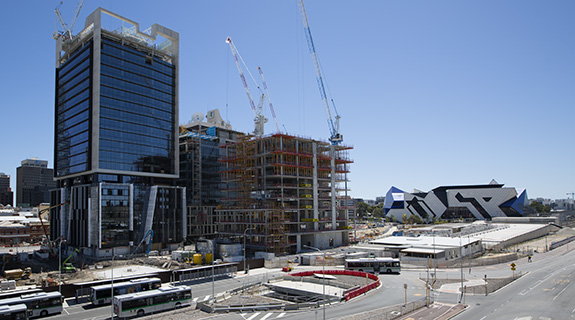 Woods Bagot Australian executive chairman Mark Mitcheson-Low said the design of the towers remained in the preliminary phase, with the Perth arm of the international studio set to design two buildings at lots six and seven at the CBD site.

“That was very recent, so we’re still working through what that might be.”

Mr Mitcheson-Low said Woods Bagot had been selected ahead of a competitive field of architecture firms in an international competition conducted by Seven Group Holdings.

The buildings would be among the tallest in the CBD if they go ahead, while another apartment project of more than 50 storeys in the city is set to win approval to proceed later this week, at the old Megamart site on Beaufort Street.

The Kings Square apartment towers will feature a shared space at podium level for residents’ amenities, as well as parking and retail on the ground floor.

The buildings, known as KS6 and KS7, are to be built on land owned by Seven Group Holdings, adjacent to Leighton Properties and Dexus Property Group’s four office towers at the precinct, which are currently under construction.

The residential towers at the Kings Square precinct are the latest projects to progress at the northern edge of the CBD, which is attracting significant interest from developers.

Business News reported yesterday that Singapore’s Crescendas had lodged a development application with the City of Perth to build a $47 million, 23-level hotel at 609 Wellington Street, directly across the road from Shell’s new headquarters, KS2.

Another Singaporean firm, Fragrance Group, is planning a significant development on Milligan Street, also in close proximity to Kings Square.

Fragrance Group purchased the site, which has approval for a 15-storey office tower and a 132-room hotel, late last year from Georgiou Capital for $30 million.

The firm is planning to convert the commercial component of the site into apartments.

That site, which is currently being used as a Wilson Carpark, backs onto Crescendas’ hotel proposal on Wellington Street and has development approval for an apartment tower containing 286 dwellings and a 14,000 square metre office building.

Also at the Perth City Link, the Metropolitan Redevelopment Authority is evaluating submissions from developers for two hotel sites, with a preferred proponent expected to be named by the middle of the year.