While a nice place to visit, the Kimberley is remote, costly to administer, and not pulling its weight. 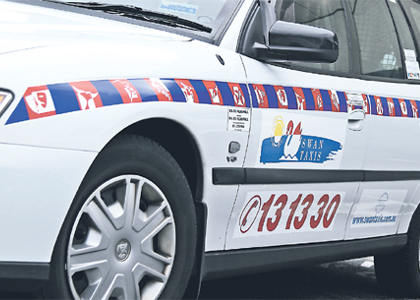 TAXI!: The Swan Taxi app is a sensational tool, except when the driver doesn’t turn up on time. Photo: Tim van Bronswijk

While a nice place to visit, the Kimberley is remote, costly to administer, and not pulling its weight.

HISTORY tells us that empires, nations and states don’t like to shrink.

The natural order of government and bureaucracy is TO expand their reach. Rulers in the ascendancy expand, while those in decline reduce their footprint, generally unwillingly and often terminally.

So I realise that I am going against the mores of government when I suggest that Premier Colin Barnett ought to consider making Western Australia smaller by excising a region that’s unlikely to march to the same tune as the rest of the state.

The region I am talking about is the Kimberley.

Covering an area twice the size of Victoria, the Kimberley has long been WA’s most romantic region; home to pastoral stations, pearling and dramatic coastal scenery, it has a touch of the colonial long since lost elsewhere in the state.

It also contains countless riches in the form of mineral and gas wealth that has barely been touched, despite more than a century of mining.

So why excise this interesting and promising region from the rest of the state?

Despite the egotistical damage wrought by withdrawal, I am increasingly of the view that the Kimberley is destined to become another Tasmania, a pretty place to visit but a drain on the rest of the economy.

It is a remote area that is costly to administer.

Some of its inhabitants, of all backgrounds, appear unwilling to embrace the economic opportunities available to them.

What spark of entrepreneurial-ism that exists is being snuffed out by interference from outside WA by federal government intervention and urban activists.

The classic example is the James Price Point development near Broome. That project is an economic godsend to the region and will be a mere speck on thousands of kilometres of otherwise untouched coastline.

A passing parade of entertainers represents the fly-in, fly-out brigade of opposition to the development, but it is fair to note that Broome itself, the nominal capital of the region, is split on the merits of the proposed gas hub.

Former Greens leader Bob Brown summarised the Tasmanian case by demanding that billions of dollars be channelled to the Kimberley even if the gas development is moved to the Pilbara. This is the ‘wanting-your-cake-and-eating-it’ approach that has seen the Apple Isle economically wane to a mendicant state.

But this is not the only issue. The federal government, limited to expansion within our own continental boundaries, has moved to interfere in WA’s sovereignty by blanketing the area with questionable heritage and environmental laws that will hinder many future developments.

If the Kimberley can’t be developed along the same lines as the rest of the state and the population of the area is complicit in creating this differential, there is a case for cutting the region loose.

If Canberra wants it, let it have it.

There is no point in having an area that simply drains the WA purse without willingly contributing to its own economic wellbeing.

If Canberra is contributing to this situation, let it deal with the cost of a marginal population that has assets but won’t or, due to the federal government’s own rules, can’t utilise them.

Let it reap what it sows.

Once Canberra has the Kimberley it can take responsibility for the social issues that blight the region. Perhaps it can make a case for merging it with Northern Territory and creating a ‘Northern Australia’ state. The people of Broome might wish for rule from Perth once they found they were being ruled from Canberra via Darwin.

That is a big price for rejecting a few hectares of gas hub and chance for economic development.

Canberra, too, might wonder what it had gotten itself into.

When it sees mineral wealth and gas development that it could plunder without those pesky state royalties, it might rethink its unnecessary green and red tape.

Readers may wonder why I’d suggest giving that up; but I am not.

In my view, Perth would win if development went ahead in the Kimberley, no matter who administered the area. Perth is the country’s resources capital; even global companies operating in Darwin have their headquarters in Perth because it has the scale to service their needs.

The Kimberley need not be a basket case but it is fast heading that way.

Perhaps it has been a little neglected by Perth. Pastoralists over the decades that have wanted to diversify and develop their farms have been thwarted by bureaucrats in Perth and Canberra, holding back evolutionary change that would have helped the region more comfortably step up from its colonial roots to enjoy the fruits of the 21st century.

If he loses that gamble, he ought to give the problem to Canberra and walk away from a problem that is only going to get worse.

I HAD my annual whinge about the taxi business before Christmas, thinking that would be it for another 12 months.

Little did I know that, on Boxing Day, I would have cause for one of those personal experiences that make columns like this all the richer.

The issue lay around booking a taxi to take my family to the airport for an early flight to NSW.

On Christmas evening I used the usually sensational Swan Taxi app to book my taxi - many hours before it was required.

I thought the app, which shows you where your taxi is, would give me peace of mind because I’d had issues booking a taxi previously.

However I became concerned when no taxi was appearing on my screen five minutes before the allotted time. I rang Swan and the operator, noting I was calling before my 4.30am booking, cancelled my booking and made a new one. In effect, I went to the back of the queue without the advantage of the online taxi tracker to know if a cab was on its way.

After a concerning few minutes I called back and was advised there was a 30-minute delay - news that created a bit of panic. Half an hour would mean missing our flight.

So we drove to the airport and parked there for two weeks. We made it comfortably, although a passenger in front of us had a similar experience and had only just made the flight.

Perhaps I ought to have known that Tuesday - even the one after Christmas - is changeover day and Perth’s public transport system would most likely be overloaded.

Nevertheless, I still struggle to believe that a customer who books ahead is treated just the same as one who rings when they need a taxi. I challenge the notion that the recently approved $9 surcharge is needed for taxis to pick up guaranteed business. In most other industries, those who book ahead receive a discount because they help the provider manage their load.

Anyway, long-term parking -despite being a little inconvenient at the airport - is cost competitive. Our taxi system, loaded by unnecessary costs, has a long way to go.

WE used points to fly business class to Sydney; it was an experience that makes me wonder about Qantas’s future.

Not only did we have a flight attendant spend more than an hour sitting on the armrest in front of us venting her problems about her manager with a passenger who appeared to be a shop steward, but our luggage was left behind because the Qantas baggage system doesn’t talk to QantasLink’s which was the carrier for the second part of our journey.

Our bags caught up to us by the end of the day, but only after being driven by courier about 60 kilometres to our accommodation. Our hosts said it happens all the time.