The curators and sponsors of the Desert River Sea: Portraits of the Kimberley exhibition at the Art Gallery of WA are hopeful the more than 150 pieces on display will challenge and broaden the public’s perception of Aboriginal art. 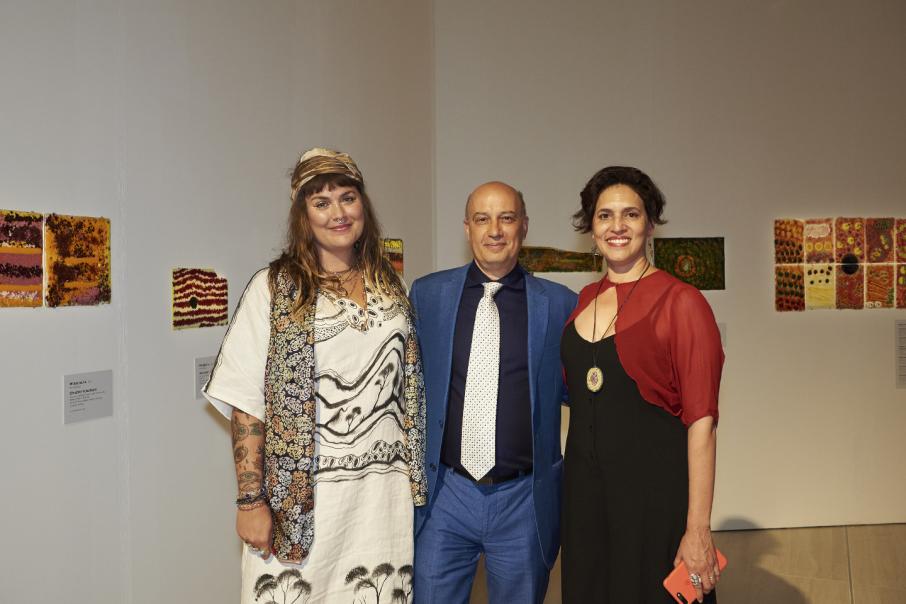 Emilia Galatis (left) and Carly Lane with the gallery’s director, Stefano Carboni, ahead of the Desert River Sea: Portraits of the Kimberley exhibition. Photo: Rebecca Mansell

The curators and sponsors of the Desert River Sea: Portraits of the Kimberley exhibition at the Art Gallery of WA are hopeful the more than 150 pieces on display will challenge and broaden the public’s perception of Aboriginal art.

The proposal to work with Aboriginal artists was put to corporate sponsor Rio Tinto eight years ago, with the first quarter of the project spent on research and planning across the Kimberley region.

However, co-curator Carly Lane told Business News an exhibition had always been the end goal, and it marked the culmination of the long-term, on-ground project.

“We always knew we were going to have an exhibition, because it’s what the Kimberley arts centres wanted,” Ms Lane said.

“Rio Tinto came on very early in the piece and took a risk.

“We didn’t know what the whole package of Desert River Sea would be like, but they had confidence in us.”

Ms Lane said the process had revolved around sharing the diversity of Kimberly art, and ensuring artists could share their individual and community vision in a way that wasn’t tied to stereotypes.

“We went out to arts centres and artists and said, ‘If you could dream any dream, what would that be?” she said.

“So we facilitated artists to make works free of the commercial market concerns and worries.

“Then we have another gallery space, which is from working with arts workers at arts centres to curate a body of work that’s meaningful to them and their communities.

“We call them legacy curators because they bring works of art from their centres into this gallery space, so everyone can see what’s meaningful to them.”

After completing much of the facilitative work with communities, co-curator Emilia Galatis said the process had been carried out without curatorial expectation.

“We always hope that remote artists have a louder voice, and that they have access to better resources and activities,” Ms Galatis told Business News.

“I hope people leave the exhibition knowing the Kimberley is a habited space full of diverse language groups.

“We’re not going to run out of content any time soon.

“There’s always this misconception that we’ve had an Aboriginal art show in Perth, we shouldn’t have another one.

“But the Kimberly is like Europe, we could have 20 shows a year and not run out of content.”

Group executive, health, safety and environment, and managing director of Rio Tinto Australia, Joanne Farrell, said Desert River Sea was particularly poignant for her, given a family history in the Kimberley region and her role in giving the launch speech for the project when it began.

Ms Farrell said that, when Rio Tinto decided to fund the project, the board had recognised the importance of its broad scope.

“At the time, the board members of the WA Community Fund were Sam Walsh, Fred Chaney, Tony Powis, Carmen Lawrence, Paul Shannon and me,” she said.

“It was such a new concept that we said, ‘Let’s walk before we run’.

“The really appealing thing to us was that there was so much capacity building built into the project.

“This is quite an important industry for Aboriginal people.

Rio Tinto invested around $1.8 million into the project in addition to in-kind support, and has used the process to increase the cultural understanding of employees, Ms Farrell said.

She said the company had realised some time ago the need to promote Aboriginal art, noting that the relationship had been an extension of Rio’s work across communities in Australia.

“Most of Rio Tinto’s operations in Australia are on Aboriginal land, so we are natural partners,” Ms Farrell said.

Both Ms Farrell and BHP Group chief executive Andrew Mackenzie recently announced their support for the Uluru Statement, furthering a push for Aboriginal people to be enshrined in the constitution.

Ms Farrell said exhibitions such as Desert River Sea added an extra dimension to this support, facilitating awareness of Aboriginal culture, and the richness and importance of their art and storytelling.

She hopes the exhibition will challenge perceptions of Aboriginal art, noting that many people assume dot paintings, a style from one region of the Northern Territory, encapsulate the boundaries of expression.

“The fantastic thing about Desert River Sea is that it’s on so many different types of media, and it’s showing that Aboriginal art progresses with technology and innovation,” Ms Farrell said.

“Hopefully we’ll broaden people’s understanding of what Aboriginal art is.”

• Desert River Sea: Portraits of the Kimberley starts tomorrow, Saturday February 9, and runs until May.