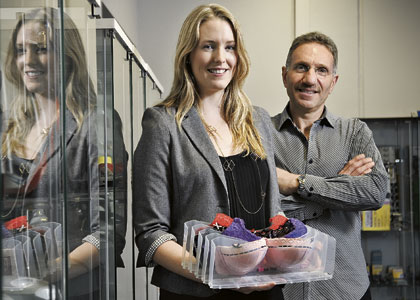 AFTER 30 years of designing products such as kettles, bike racks and even bra holders, Perth-based industrial designer Edward Khoury has decided the lure of the mining boom can be ignored no longer.

Mr Khoury and his wife established Form Designs in 1982 after migrating to Western Australia from South Africa.

While they have built a strong portfolio in the three decades since by working predominantly with individual inventors, and there are no complaints about the business’ success, Mr Khoury told WA Business News the time had come to tap into the state’s largest industry.

“The opportunity is there and we don’t want to get left out; we think there’s a lot of innovation happening in the mining industry at the moment,” Mr Khoury said.

It hasn’t taken long for the company’s shift in focus from individual clients to resource-focused companies to result in a new product – a collaborative project with Canningvale-based Cargo Movers has created a new shipping container to move pipeline diagnostic and cleaning tools.

The modular container is currently being trialled by a UK-based resource company.

But Mr Khoury said the business was developing a number of other products for the resources industry, which were likely to come to fruition in the next six to 12 months.

“I think we have an advantage over pure engineers (which generally design resource equipment) because we are very focused on innovation.”

Form Designs has even been approached by an engineer who had designed a product but needed the industrial designer’s expertise to make it more aesthetically pleasing, according to Mr Khoury.

“(The product) lacked that little bit of finesse that we were able to put into it,” Mr Khoury said.

The new focus on mining and industry was expected to make up about 60 per cent of Form Design’s overall business in the long term; the other 40 per cent would remain dedicated to the individual clients, which had historically been the business’s main source of income.

The company has also embarked on a joint venture with marketing company ToLife Technologies to help increase revenue; the resulting company, Form 2 Market, enables the Form Designs team to look after a client’s entire project from the design phase right through to marketing the product and getting it into stores.

“Often (clients) don’t have the required knowledge, the funding or the contacts,” Mr Khoury said.

“(Now) when clients come to us with a product we are also able to market that product in Australia, New Zealand and eight other countries, including the US.”

The slowdown in retail sales led to a slight drop-off in work for Form Designs, with uncertainty about whether products would sell meaning the ‘inventors’ Form Designs relied on were unlikely to fork out for their bright ideas for development.

To combat the slowdown the company focused on providing a “little bit extra” to clients.

“We love what we do; we add value and if our clients are getting value for money they’re going to come back again,” Mr Khoury said.

While growth had not been on the scale that Mr Khoury would have preferred, it was still significant given the tough economic environment.

The company is also in the midst of a wave of new developments; among these is the ‘Boobie Trap’ invented by 24-year-old New Zealander Emma Avison, which stops bras from being damaged when stored in a disorderly way.

Mr Khoury said there was still a lot of money to be made from individuals coming up with new inventions, but the untapped potential in resources could not be overlooked.

But the same industry that holds promise for Form Designs’ future also presents Mr Khoury with one of his biggest challenges – offering pay packets too hefty for Mr Khoury’s industrial designers to ignore.

“The mines offer double what we can offer and they say ‘sorry, I’m leaving’,” he said.

“Some are born industrial designers and they would never go to the mines, but for some guys it’s just too much money.”

The company did its best to retain staff by making the office a family oriented environment; on the management front, daughter Victoria Khoury is a current director and in line to take over running the company in the future.

It also runs a policy that if a staff member doesn’t feel like coming to work the answer is simple – don’t.