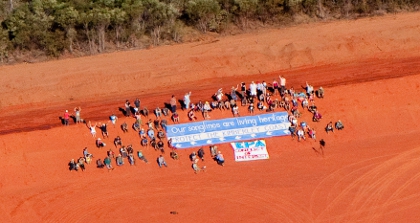 Protesters have unfurled a massive banner inside Woodside's work area for the Browse gas hub.

Environmental Protection Authority (EPA) chairman Paul Vogel said four of the EPA board's five members had been stood aside from the decision due to conflicts of interest, leaving him to make the final call.

Elizabeth Carr had worked for the proponent, WA's Department of State Development, while Denis Glennon and Chris Whitaker owned Woodside shares in self-managed super funds and Rod Lukatelich was employed by one of the joint venture partners, BP.

Mr Vogel said he had made an informed decision because he had consulted with a wide range of experts.

"This has been a long and thorough assessment by the EPA: it's been going on for four years, which is an extraordinary length of time even for a project of this nature," he told ABC Radio on Monday.

Protesters from the Broome Community No Gas Campaign, who don't want the Browse hub to be built at James Price Point in the Kimberley region, have questioned the integrity of the EPA assessment.

"The Broome community is outraged that we’ve been misled into believing the EPA report would be the definitive assessment of the proposed development’, said Nik Wevers of the Broome Community No Gas Campaign.

"After waiting for 18 months for the EPA assessment to come out and then to learn that the process, and potentially the report, is so thoroughly flawed is outrageous."

If the EPA gives the $30 billion project the green light, the Woodside-led joint venture will then need approvals from the state and federal environment ministers.

In April, the federal and state governments gave Woodside more time to make a final decision whether to proceed with the project.

The Woodside final decision was previously expected by mid-2012 but is now slated for the first half of 2013.