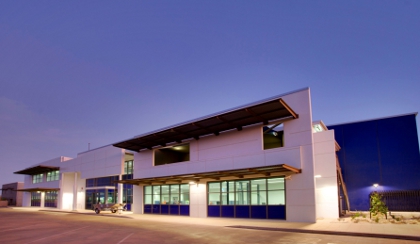 Gavin Construction has set a new standard for green building in Western Australia, with the completion of industrial supplier Blackwoods’ new distribution centre in Karratha.

The office and warehouse facility looks set to become the first 5 Star Green Star Industrial Design rated facility ever to be built in WA, and only the third in the nation. Gavin is also targeting a 5 Star Green Star ‘As Built’ rating.

Gavin expects the formal rating to be handed down by the Green Building Council of Australia next month. In order to achieve the 5 star rating, builders must secure 60 points from the Green Star Industrial V1 Technical Manual; an estimated total of 65 points have been accumulated so far.

The building’s photovoltaic system, believed to be the biggest installed on an industrial building in WA, is expected to provide approximately 60 per cent of the building’s total annual electricity needs. Waste water is treated and reused on site, and the building contains induction lights rather than the metal halide lights generally used in warehouse lighting.

Wesfarmers subsidiary Blackwoods had called for compliance with the 5 Star standards as part of its project brief. The project was undertaken in conjunction with consultants Peter Hunt Architect and Wood & Grieve Engineers.

“The rating was made even harder to achieve because the facility is based seven kilometres out of Karratha which makes some of the easier Green Star points, such as (those awarded) for the availability of public transport, impossible to achieve,” Gavin said in a statement.