Karratha is undergoing a transition as more families move to town, attracted by the improved infrastructure and new housing developments. 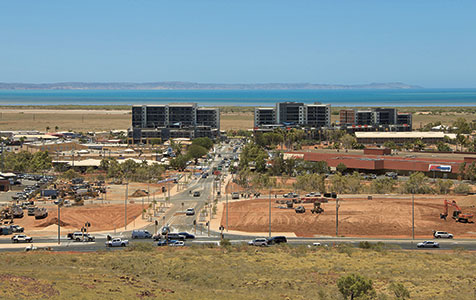 As the first stage of Karratha’s $65 million city centre redevelopment nears completion, the state government has launched a $110 million second stage of infrastructure works in the town’s fast-growing centre.

The second stage will include a hotel and links to a new hospital, which is due to be built in the city centre by 2017.

As part of stage two, Mirvac will project manage the creation of a public square called The Quarter, which will have apartments, a multi-storey car park and a 6,000 square metre commercial and retail building, which it will build.

One of the most visible changes to Sharpe Avenue is Finbar’s $228 million Pelago development, which has transformed the town’s skyline with the nine-storey apartment complex adding 288 apartments.

It’s one of a number of housing developments by Finbar, ABN Group, Mirvac, and PRD Nationwide in association with LandCorp, which brought 265 homes to the market in 2012 and more than 390 new homes this year.

Mr Grylls said the government planned to increase Karratha’s current population from about 18,000 to 50,000 by 2035, largely through enticing previously fly-in, fly-out workers to become permanent residents in the Pilbara with their families.

“We’re really seeing, I suppose, a transformation of what Karratha is,” he said.

“The families that are driving the state’s economic growth are at last able to share in facilities that would be commensurate with what they would expect if they lived in most other places in Australia, because up until now they didn’t have that opportunity.”

To drive this demographic shift, the government has worked with corporations in the area to invest in infrastructure, including: a $65 million Leisureplex with pool, gym and sporting facilities; the $88 million Karratha Senior High School; a $13.5 million family centre providing child care and health facilities; a $4.5 million youth shed activity centre; and $4.9 million sporting complex.

A $207 million hospital, announced by the state government in 2012, is being planned in the city centre near Pelago to replace the ageing Nickol Bay Hospital.

However there has been some doubt over the new hospital’s eventual location and when it will be built.

The government initially allocated $150 million from Royalties for Regions in the 2010-11 budget to redevelop Nickol Bay Hospital, before announcing an additional $57 million to instead construct a new facility in the town centre, which detractors have said is on a flood plain.

Planned housing developments include ABN Group’s Tambrey, with 41 homes currently under construction, and Mirvac’s Mulataga project, which will develop more than 2,000 homes starting next year.

PRD Nationwide is creating The Ranges, a 370-unit and townhouse development to be built over the next five years.

The biggest complaint in Karratha in recent years has been the cost of housing; in this regard, the median price for a house has fallen to $679,000 compared to boom prices of $1 million-plus for an average house.

According to the Pilbara Development Commission, the current average rental price for a three-bedroom house in Karratha is $1,068 a week, a figure that has fallen from a peak of $2,500-plus a week during the height of the mining boom.

Shire of Roebourne chief executive Chris Adams said council was responding to a demand for new homes, approving $544 million worth of housing developments in 2012 and $474 million this year to date.

While the Real Estate Institute of WA’s September quarter report found rents in Karratha were 19 per cent lower than year-on-year figures, Mr Adams said Karratha was still a good place to invest.

“Yields are fantastic, rental yields are still eight to 10 per cent. We’ve been experiencing double digit yields and double-digit capital growth for the last five to six years. You’re not getting the capital growth currently but you’re still getting fantastic revenue,” he said.

The author travelled to Karratha as a guest of the Pilbara Development Commission.