Karma Resorts’ plan to spend $20 million redeveloping the Rottnest Lodge into a resort-style hotel are a step closer to being realised, with lease negotiations finalised with the state government today. 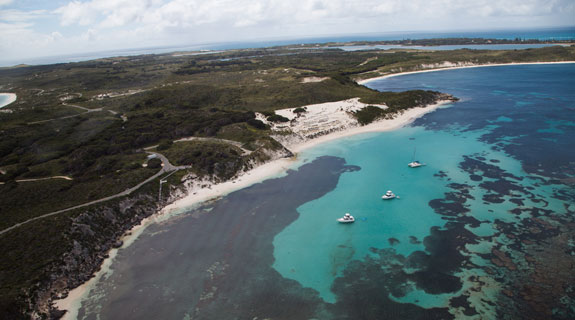 Visitors to Rottnest will soon have another option to stay. Photo: Attila Csaszar

Karma Resorts’ plan to spend $20 million redeveloping the Rottnest Lodge into a resort-style hotel are a step closer to being realised, with lease negotiations finalised with the state government today.

Tourism Minister Kim Hames said the agreement, which would be effective from June 1 2018, paved the way for the construction of a long-awaited new option for tourists to stay on Rottnest Island.

Karma Resorts, owned by tourism identity John Spence, unveiled its plan in January this year, which comprises 80 new units, a restaurant and bar and an open-air cinema on five hectares of land in close proximity to one of the island’s salt lakes.

Construction is expected to begin before the end of the year or early next year.

Dr Hames said it had taken some months to finalise the lease, but the final negotiations had resulted in a satisfactory outcome for all parties.

“The whole design promises to be an exciting and innovative addition to Rottnest Island,” Dr Hames said.

“Visitors can now look forward to a resort-style hotel of the same high standard that Karma has become famous for around the world.”

The redevelopment of the Rottnest Lodge will also result in the historic Quod Aboriginal prison site to be returned to the Rottnest Island Authority.

The RIA is planning an indigenous interpretive centre at the Quod, which is adjacent to the Wadjemup Aboriginal Burial Ground.