A cheeky JV proposal for the Mid West has been dropped. 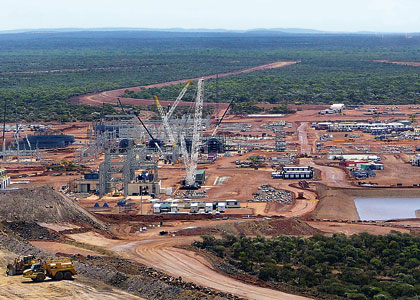 NEW DIRECTION: Karara Mining is reviewing its options to transport ore to Oakajee from its Mid West development.

A cheeky JV proposal for the Mid West has been dropped.

THE Karara iron ore joint venture in the state’s Mid West has abandoned its bid to access the proposed Oakajee port via an infrastructure corridor skirting the north-east edge of Geraldton.

Citing onerous conditions imposed by the Warden’s Court, which was dealing with the application by Karara Mining, joint venture partner Gindalbie Metals confirmed this week the use of the corridor was no longer an option.

Karara made the surprise bid late last year to seek access to the now-stalled Oakajee development via the corridor, which links the proposed port to the north of Geraldton with the Narngulu industrial centre near the town’s airport.

The joint venture even floated the idea of using a conveyor system to move iron ore to the port along the corridor, which has long been part of planning for the area.

A conveyer system would have avoided the necessity for a competitive rail link into the port.

Oakajee Port & Rail’s agreement with the state government was thought to have precluded alternative rail links into the port, ostensibly to minimise ore traffic going through or near Geraldton and also to maximise the use of the proposed new 540-kilometre rail line to provide the best possible infrastructure at the start of the project.

The Narngulu corridor application appeared to give Karara, a venture between Gindalbie Metals and China’s Ansteel, further negotiating power in its discussions with Oakajee Port & Rail, which wanted iron ore from Karara’s mines to join its own railway at a junction about 100km inland, near Mullewa, and pay for the privilege.

Karara had already negotiated with WestNet Rail owner Brookfield to upgrade the existing line from near Mullewa to Geraldton’s operating harbour.

The timing of the Karara application, in November, was also close to the state-set deadline for Oakajee to confirm funding from its partners; a milestone it did not achieve.

The application was viewed as controversial, in part, because it came as a surprise to landowners and the shires involved. Apart from a host of local farmers and landholders, objections to the application included Geraldton city, Chapman Valley shire, LandCorp, the WA Department of Planning, Broadcast Australia, Investec Bank, and Brookfield Rail.

In confirming the decision to withdraw its application, a Gindalbie spokesman said the court demanded too much too soon.

“Conditions regarding the finalisation of commercial arrangements imposed by the court were not achievable in the time frame given,” the spokesman said.

He said that the joint venture would pursue other routes to market for its ore, which was currently being shipped out of Geraldton.

Geraldton’s capacity is limited and Karara will need to find another port if its expansion plans are to work. It is seeking to ship 2 million tonnes a year of hematite ore and 8mtpa of magnetite ore by the end of 2012. Ultimately it was to ship 30mtpa.

“We were looking at many options and that was just one of many,” the spokesman added.