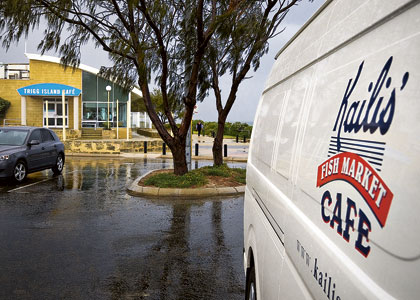 THE Trigg Island Cafe near Scarborough has reopened under a new name, and is due to undergo a major refurbishment next year costing up to $3.5 million, after new owner Victor Kailis struck an innovative leasing deal with the City of Stirling.

According to council documents, Kailis Pty Ltd has taken over the existing sub-lease, due to expire in 2013, and committed to a new 10-year sub-lease plus a further option term of 10 years.

Kailis requested the new sub-lease to provide security of tenure so it could commit to upgrades of the existing facilities, which the company estimated would cost between $2.5 million and $3.5 million.

This compared to the $375,400 the city planned to spend on upgrade works on the site under the sub-lease agreement with Mr De Clerk.

Under the new sub-lease the city will also be relieved of paying maintenance costs, with Kailis paying for the site’s upkeep.

Kailis will take-up the current rent of $150,000 per annum for the site, which is subject to review at 30-month intervals.

The 20-year sublease is expected to generate more than $3 million, which in turn will be committed to the development of the Trigg Beach region as part of the city’s lease over the area.

In 2009 the city employed architects to provide advice on a building renovation project but was unable to start work after a breakdown of negotiations with Mr De Clerk’s Seaview Management.

The work would have taken two months, but The City of Stirling and Seaview could not agree on a date and timeframe to close the cafe for the works.

In 2011 the city declined an application by Seaview for a new five-year sublease with an option to extend by a further five years, but soon after was informally approached by Kailis Pty Ltd advising that it had entered into private negotiations to purchase the business.

Kailis has already carried out minor refurbishments and has proposed to conduct major building upgrades in 2013.

Mr Kailis, whose Fremantle-based business has won the WA Tourism Awards Tourism Restaurant category three times and is part of the awards Hall of Fame, declined to comment at the time WA Business News went to print.