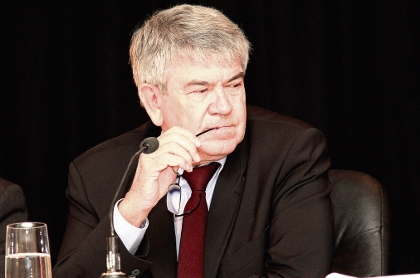 Jupiter chairman Brian Gilbertson says the capital plan will leave the company debt-free as its projects ramp up to production.

Brian Gilbertson’s Jupiter Mines has raised $40 million through a private placement to advance development at its manganese and iron ore assets in South Africa and Australia, and has revealed plans to raise a further $85 million.

The placement, which was priced at 16 cents per share, was made to Jupiter’s Netherlands-based major shareholder, superannuation fund Stichting Pensioenfonds APB.

Following the placement, APB will hold a 14 per cent stake in Jupiter.

Jupiter said it would also undertake a 5 for 19 rights issue, also priced at 16 cents per share, to raise up to $85 million.

The funds from the placement and the rights issue will be applied to progress development at Jupiter’s Tshipi manganese project for a start up by the end of the year, with a ramp up to a targeted production rate of 2.4 million tonnes per year.

The capital will also fund full-scale pilot plant test work at the Mt Ida magnetite project in WA, with a feasibility study due to be completed early next year.

Jupiter said it would optimise a feasibility study on its Mt Mason hematite project, also in WA, to enable a final investment decision next year.

“Notwithstanding the current challenging environment in capital markets, the company has chosen to undertake this fund raising so as not to compromise its growth strategy,” chairman Brian Gilbertson said.

“Our three attractive projects are well-advanced and should deliver significant shareholder value.

“This fundraising enables Jupiter to remain debt-free as it closes in on first production and cash-flow from the Tshipi manganese project.”