SPECIAL REPORT: Global oil prices may have halved in the past 18 months, but WA onshore energy players like their prospects. 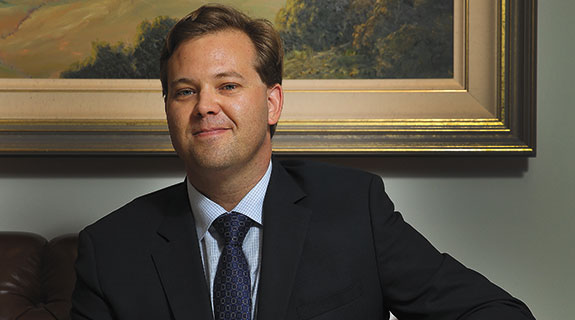 The discovery by AWE last year of what is potentially the largest onshore gas find in Western Australia in 50 years, Waitsia, has set off a feeding frenzy in the Perth Basin.

It’s a dynamic field of contenders, with juniors keen to acquire acreage cheaply and drill wells to fill a potential opportunity in the domestic market.

However, their capability to do so is somewhat limited by a lack of rigs.

Activity further north continues, too, with Buru Energy recently announcing it had started commercial production at its Ungani oil field in the Canning Basin.

And despite controversy on the east cost, unconventional drilling is holding promise as part of the west’s energy future.

The Perth Basin extends from as far south as Augusta up to Geraldton, with most of the action just a couple of hundred kilometres from Perth.

Importantly, most potential fields are within a stone’s throw of either the Parmelia or Dampier-to-Bunbury pipelines, giving direct access to the Perth market.

Key Petroleum managing director Kane Marshall said his company’s assets would be reasonably easy to monetise and would benefit from their proximity to infrastructure.

“Everyone’s very negative and we see a lot of opportunities that are very cheap, and a lot of companies have got way too committed.”

Mr Marshall said it was likely some companies would seek to divest acreage in the near term, and that Key had the advantage of low overheads.

“I certainly think in the next six to 12 months we’ll be picking up more projects rather than getting rid of them,” he said.

“You don’t want to have too much acreage at this time in a downturn, you’ve got to be very careful with your capital.

“We’ve always had a lean and mean strategy.”

Mr Marshall said Key was well supported, with about half a dozen major shareholders and a strong cornerstone investor.

That enabled it to take a longer-term view in its operations, with everyone buying into the company’s strategy and believing in the prospectivity of its permits.

Recently, however, the company had some bad luck with its Dunnart-2 well, which didn’t achieve a commercial flow, although the company still considers the surrounding area prospective.

Key is one of a number of companies looking to hit the next big thing in the Perth Basin.

“I like the gas prospects in the Perth Basin … 50 years between the largest two gas discoveries in the basin; I would call that underexplored.”

Mr Marsden said Ocean Hill was an older well and there had been gas in the original well.

The company could now benefit from technological improvements, and as such enjoyed a one-year total shareholder return of 221 per cent to June 30.

The five-year return is a much more modest negative 14 per cent, however.

The Ocean Hill block is highlighted in a recent research report by investment house Argonaut, with about 360 petajoules of contingent reserves.

Between those five fields in the report, there are enough contingent reserves for about six years worth of domestic market demand. 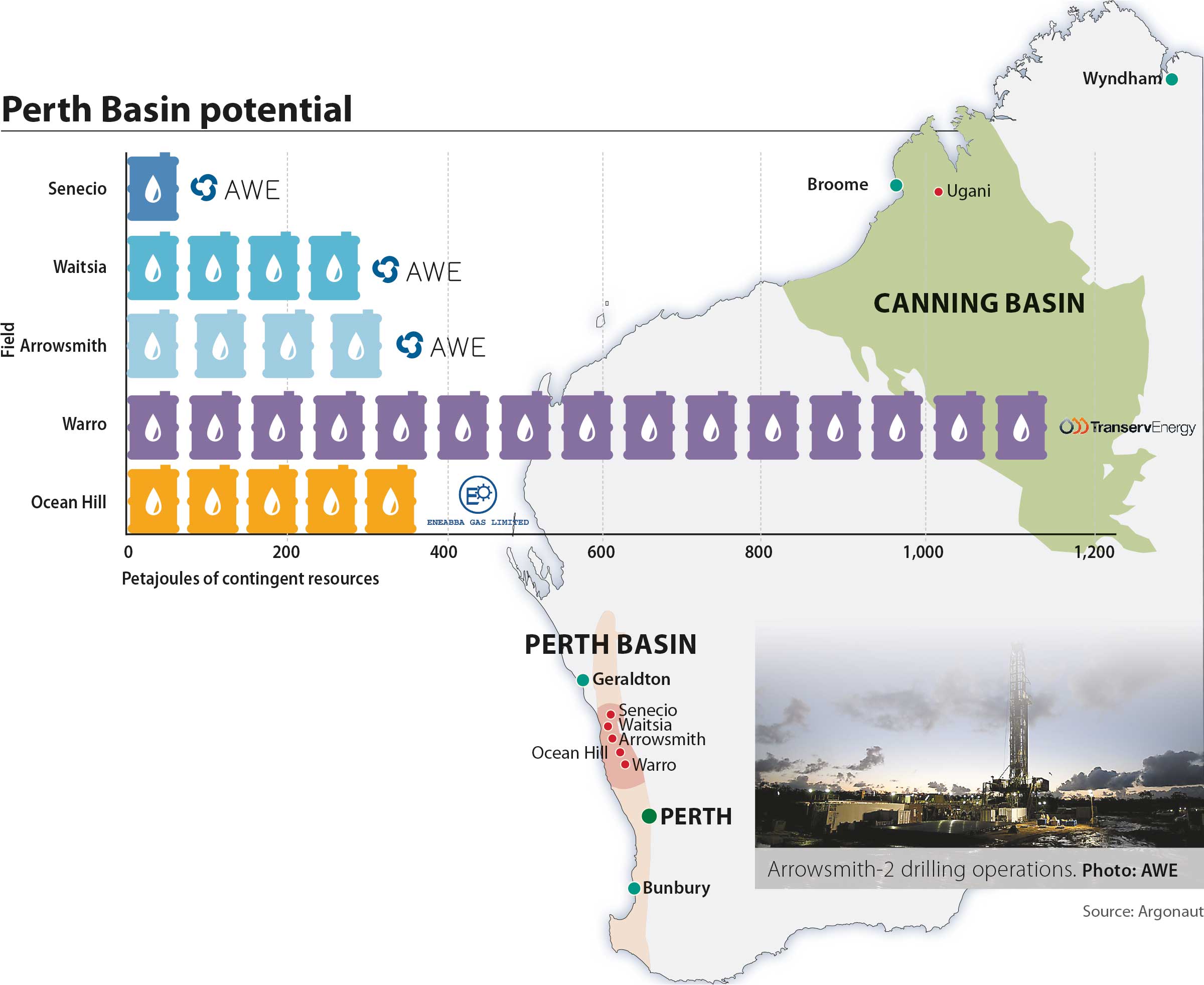 Several companies have potential assets that could enter development, with AWE the most active in the market.

In addition to a number of producing fields, the Sydney-based company owns a 50 per cent holding in Waitsia, with another interstate player, Origin Energy, holding the remaining half.

Initial estimates for contingent resources in the field are around 290 petajoules.

A further big deposit, Warro, is controlled by a joint venture between Alcoa and Transerv, with a potential of 1,000-3,000 petajoules of recoverable gas.

It was discovered in the 1970s, but has remained undeveloped because as a ‘tight gas’ field it is a substantial distance underground.

Tight gas is generally deep below ground and found in compacted limestone or sandstone.

Such formations will generally require hydraulic stimulation to bring production.

Like Ocean Hill, Warro is a field that could benefit from improving technology, according to Transerv executive director Stephen Keenihan.

“We’ve had some recent success (in the Perth Basin) and it’s really close to the market,” Mr Keenihan said.

“(Warro) has been discovered for a while but the technology has advanced.”

He said that gas prices were also now more robust and, after further exploration, the company was more confident about the amount of recoverable gas.

The first phase of a development at Warro would be intended for 2017-18.

In the meantime, the company is undertaking a two-well drilling program aimed at securing commercial flow without excessive water.

The outcome of this will drive the future of the project.

Scottish company Warrego is a private play with a permit in the Perth Basin, and will be on the hunt for potential acreage acquisitions, according to chief financial officer Jim Brunton.

Mr Brunton said the basin had a lot of potential, and that most onshore plays would be of lower cost than offshore options.

“Demand and supply curves are starting to move in favour of higher gas prices,” he said.

Warrego plans to introduce some new drilling techniques into Australia that are more widely used in North America and in the North Sea, including for horizontal wells.

Tight gas is one of three forms of unconventional gas exploration that are currently the subject of some debate.

Mr Keenihan said the regulatory structure for the industry was firm, and hoped it would allay concerns from some groups about the environmental impact of hydraulic fracturing.

“We’re talking about rocks that are 4,000 metres beneath the earth,” he said.

“There’s no resemblance between what we do and what is done in coal seam gas in the eastern states.

“I can’t sneeze without getting government approval.”

One key factor that will affect the chances of project development in the Perth Basin is the state’s domestic gas reservation policy.

WA uses around 360 petajoules of gas annually, substantially above any other state, leading Premier Colin Barnett to recently proclaim that it was unique in the developed world because of its reliance on gas pipelines more than the electricity network.

The North West Shelf Joint Venture provides almost half of this total, however, this fraction is set to fall dramatically when current contracts expire in 2020.

The Gorgon and Wheatstone domestic reservation obligations will make up some of that shortfall, with an initial supply of around 140 petajoules annually between them.

“Probably the most important thing that’s happened recently is the deal between Colin Barnett and the Browse JV,” he said.

“So all of a sudden now you’ve got the Perth Basin, which has been underexplored … and you’ve got a mega-project that could save up to $3 billion if they found a substitute for the domestic gas.”

Browse could buy the gas from a new producer and use that to fill its quota, which would provide opportunities for aspiring players, he said.

That would mean a number of potential fields would be high margin for the companies that controlled them.

Alcoa is the state’s biggest user of gas, with its three aluminium refineries drawing a sizeable chunk of WA’s gas supply.

With its current contracts due for expiry in the near term, that has given the company a strong incentive to look for new prospects.

“Alcoa has single-handedly been the biggest supporter of the Perth Basin,” Mr M-O Kin said.

“Without Alcoa, I would say the Perth Basin would be behind 20 years.”

Alcoa holds 43 per cent of the Warro project, with an option to extend that to 65 per cent through an investment of at least $100 million into the project.

Argonaut has an interest in that project, too, with a 7.3 per cent stake in Transerv.

Another party with financial interest in onshore WA is ASF Group, a listed company with the stated goal of partnering Australian and Chinese businesses.

ASF is a major shareholder in Key, with chairman Min Yang serving on the board of the energy junior.

Ms Yang also holds directorships at Metaliko Resources and Rey Resources. That could lead to a close working relationship between Key and Rey, which holds permits onshore in the Canning Basin.

ASF holds a 19.9 per cent interest in Key and a similar holding in Rey. 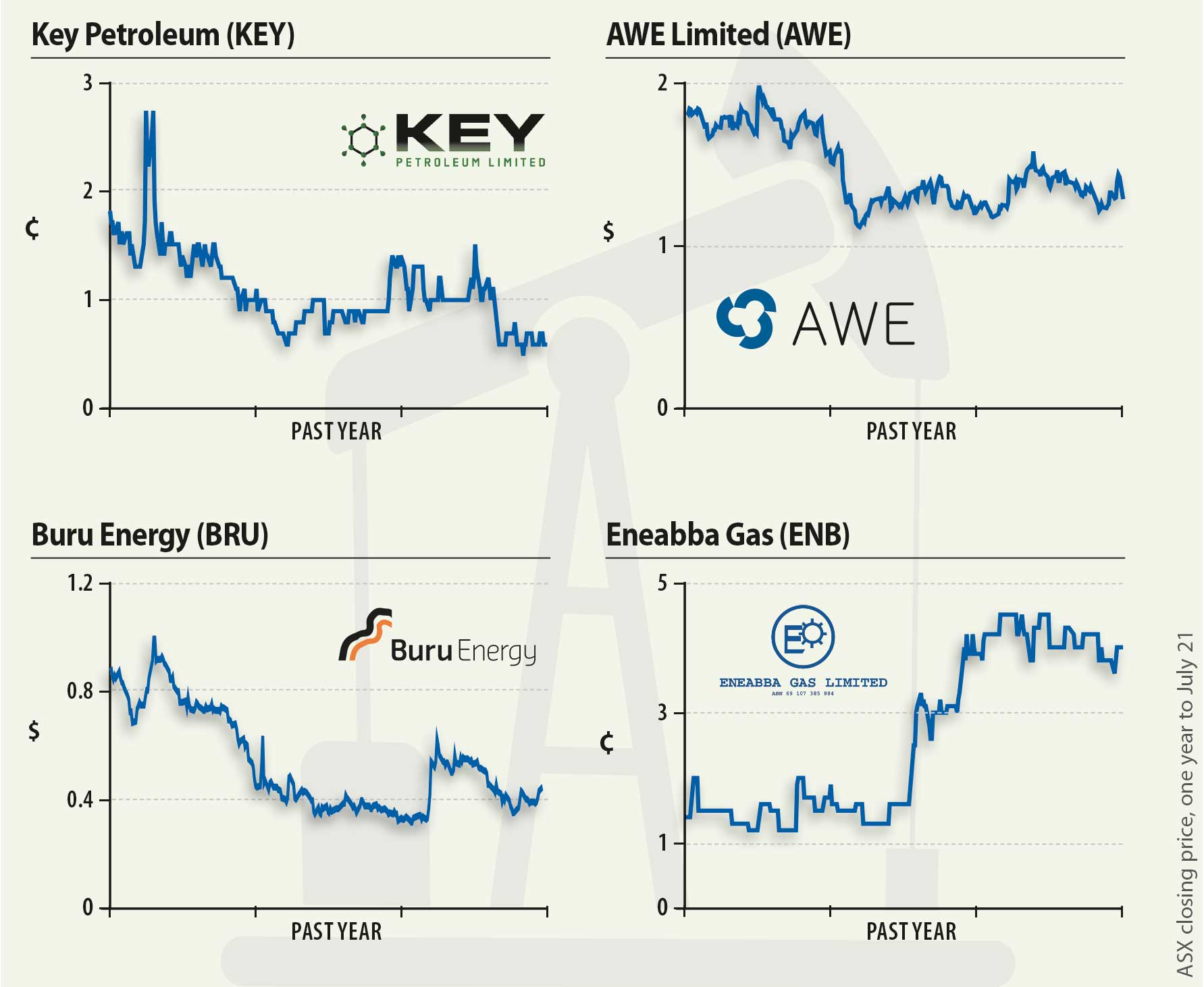 A potential problem for juniors will be the lack of available drilling equipment in the Perth Basin, with several sources telling Business News more rigs will be needed.

Mr Marshall said Key would consider bringing a rig on to the market to fill this need.

That could involve assistance from the company’s Chinese investors, and would bring an added benefit of additional cash flow for the junior, which is operating its own oilfield services division.

Many companies claimed there was only one rig in the region that could reach required depths, although Calenergy subsidiary NewGen Drilling recently introduced another to the market.

That drill rig is owned by Enerdrill, of which Argonaut is a major shareholder, while Argonaut managing director Eddie Rigg serves as a director of Enerdrill.

Mr Keenihan said another rig would likely be needed if any of Transerv’s or AWE’s potential fields went into development.

He said the generally depressed resources market could be of benefit to players in the basin, who are driven by different fundamentals, in that it could ensure equipment could be purchased and operated more cheaply.

The Canning Basin is still providing opportunities for onshore players, although its remoteness has been an impediment.

Buru Energy has had a difficult year, with a shareholder return of negative 66 per cent in the 12 months to June 30 wiping off gains in the preceding few years.

The period included a controversial flare up over the company’s native title deal, and an investigation by the Department of Mines and Petroleum into an alleged gas leak. The company was cleared of wrongdoing over the minor leak, with the department noting that it appeared to have been caused by third-party damage.

There was better news in mid-July when the company announced it had commercialised production at its Ungani well, which it owns in a joint venture with Mitsubishi.

Production at the conventional Ungani oil well will start at 1,250 barrels of oil per day, with a target of 3,000 barrels. That liquid is being trucked to Wyndham and exported through a port there.

Buru has recently begun work on a new conventional oil well nearby to Ungani, Praslin, and signed contracts for a pilot tight gas exploration program at the Laurel formation.

It is also in gas sales negotiations with Alcoa, which have been extended to the end of the month.