The state government’s privatisation program hit more trouble today, with a mining lobby group that represents the users of the Utah Point wharf condemning a lack of consultation on the proposed sale. It follows a move by the National Party on Tuesday to refer the sale legislation to a parliamentary committee. 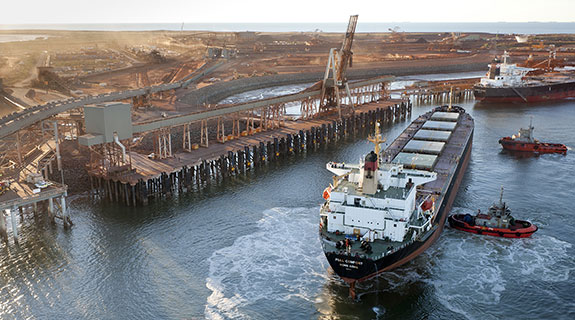 Utah Point is one of 47 export terminals in WA.

The state government’s privatisation program hit more trouble today, with a mining lobby group that represents the users of the Utah Point wharf condemning a lack of consultation on the proposed sale.

It follows a move by the National Party on Tuesday to refer the sale legislation to a parliamentary committee, delaying its approval by the Legislative Council until at least mid-May.

The Association of Mining & Exploration Companies said a lack of consultation had created uncertainty for Atlas Iron, Mineral Resources and Consolidated Minerals, the three existing users of the terminal.

Located in Port Hedland, Utah Point is used for iron ore and manganese exports, with the three miners having contributed part of the capital cost.

Amec said its key concerns were that the port remain exclusively available for the junior mining industry and that fees and charges for usage of the port remain commercially reasonable.

Amec supported the move to refer the legislation to committee, it said in a release today.

“In 2012, the Pilbara Ports Authority unilaterally mandated significant increases to rents, fees and charges payable by the users of Utah Point as well as introduced new charges that penalised the users for increasing their export rates,” Amec said.

“That is, the users were forced to pay a higher rate per tonne to increase their throughput even though the increased throughput actually reduced the overall costs of operating Utah Point on a per tonne basis.

“This increase in port fees and charges resulted in Utah Point generating in excess of 30 per cent return on investment at current throughput rates.

“In circumstances where Commonwealth guidelines suggest an eight to 12 per cent return on investment for similar infrastructure, the users have been heavily overcharged.

It comes just a day after the Nationals walked away from the state government’s proposed $2 billion lease of Fremantle Ports.

That move similarly fell over because of concerns about transparency.

But the withdrawal of support scored criticism from the business community, with the Chamber of Commerce and Industry of WA saying a state-owned port would be likely to receive less investment and reduce competitiveness.

Fremantle is one of only two ports in an Australian capital city still state-controlled, with Melbourne currently undergoing a sale process.

WAFarmers president Tony York supported the move by the Nationals, however.

“One cannot be expected to consider the full proposal and develop an informed position when critical details have been deliberately kept from key stakeholders,” Mr York said.

“There needs to be much greater transparency in the proposal if it has any chance of garnering the support it needs to progress.

“We believe that having the Australian Competition and Consumer Commission as an overarching regulator would be a step in the right direction towards achieving this, and ensuring that the interests of all stakeholders would be fairly considered.”

So far, the only successful asset sale for the state government has been that of the Perth Market Authority's wholesaling business in Canning Vale.