"You could drop a nuclear bomb on this parliament and Julie Bishop would crawl out as deputy leader." Labor senator Sam Dastyari's light-hearted joke with journalists was pretty close to the mark. 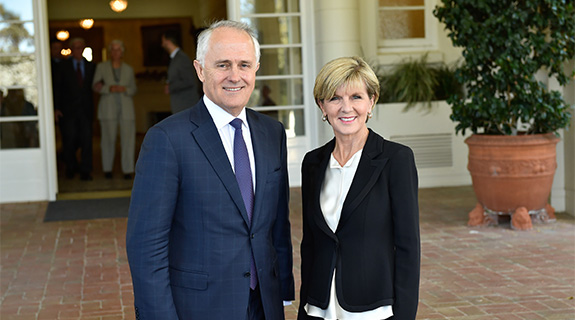 "You could drop a nuclear bomb on this parliament and Julie Bishop would crawl out as deputy leader."

The 59-year-old former Western Australian lawyer known for her killer stare and sharp suits has played a high-profile role in federal politics since being elected to the seat of Curtin in 1998.

Mooted as a possible WA state Liberal leader, Bishop instead stayed in the federal sphere and became aged care minister in the Howard government in 2003.

John Howard rewarded her with the education portfolio and made her responsible for women's issues in 2006, but it was short-lived with the government falling in the November 2007 Ruddslide.

Bishop was elected deputy Liberal leader under opposition leader Brendan Nelson after the 2007 poll and was handed the shadow employment and workplace relations role.

When Nelson's leadership imploded 11 months later she remained deputy under the new leader Malcolm Turnbull and took on the shadow treasury role.

Widely considered a failure in the portfolio, she stepped aside months later and shifted to foreign affairs - a job in which she has thrived to this day.

Incoming leader Tony Abbott kept her by his side after his one-vote party room win over Turnbull in December 2009 and she kept the portfolio after Labor scraped into minority government in 2010.

As Abbott shunted the train wreck that was federal Labor in 2013, Australia's first female foreign minister faced some tough challenges.

She reaped the benefits of Labor's lobbying for a United Nations Security Council seat, making the most of it to tackle issues including Iran, Islamic State's rise in Iraq and Syria and shaming Russia over the MH17 tragedy.

The families of the Malaysian Airline disaster victims appreciated her deep and ongoing interest and sympathetic response.

She undoubtedly played a key role in healing the damage caused to relations with Indonesia by Labor's live cattle debacle, turning back boats and the Indonesian president phone tapping scandal.

At times, her profile put her ahead of Turnbull in the popularity stakes.

The Australian Women's Weekly named her the most powerful woman in Australia last year, ahead of Abbott's chief of staff Peta Credlin.

Bishop knows the price and duty of being deputy, having tapped Abbott on the shoulder on Monday ahead of Turnbull's successful challenge.

As she told the Nine Network on Tuesday: "Being the deputy brings certain obligations and responsibilities and one of those is to keep the leader informed of the views of the backbench."

But she's comfortable in the fact that she played the diplomat, not the assassin.

"I am the deputy of the party. I stood as deputy. I didn't challenge Tony and I have not challenged for the leadership. So there is no parallel (to Julia Gillard) there."