Joondalup’s CBD is set to be transformed by a pair of major projects, including the suburb’s first high-rise building. 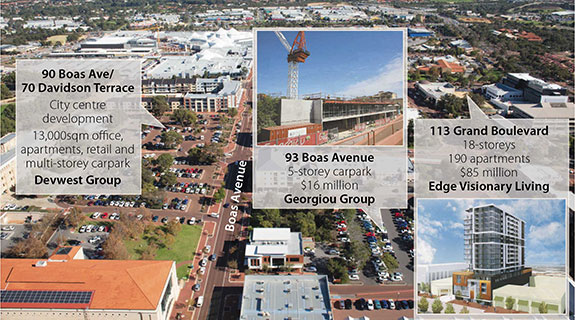 Joondalup’s CBD is set to be transformed by a pair of major projects, including the suburb’s first high-rise building.

The first project under new development guidelines in the City of Joondalup has been given the green light to proceed, with the 18-storey apartment block expected to be a significant catalyst for further high density and high-rise building in the city’s town centre.

The City of Joondalup recently removed all height restrictions in its CBD to encourage high-density living, while also setting a minimum of five storeys for development in the area.

The guidelines are designed to help significantly increase the population in Joondalup’s city centre, with the city also aiming to facilitate development to allow for the establishment of more than 2,000 new businesses and 20,000 local jobs by 2031.

The first project to take advantage of the new rules is an 18-level, 190-apartment mixed-use project by Edge Visionary Living, which is set to become the suburb’s tallest building.

It was approved by the metropolitan north-west joint development assessment panel earlier this month.

Edge Visionary Living managing director Gavin Hawkins said the fundamentals of Joondalup, and the planning guidelines, meant the timing was right to pursue the $85 million development.

“We felt that Joondalup was underdeveloped for a long period of time, due to the old planning schemes,” Mr Hawkins told Business News.

“The new scheme is obviously promoting growth in Joondalup and trying to get more density in the city centre, and we are great believers in that vision.”

Plans are also in motion in Joondalup for a major city centre development across 90 Boas Avenue and 70 Davidson Terrace.

The City of Joondalup signed a memorandum of understanding with developer Devwest Group in December last year for the construction of a 13,000 square metre mixed-use project comprising commercial, residential and retail components.

Devwest executive director Chad Ferguson said the office component of the project would be pitched towards having a state government tenant, part of long-awaited decentralisation plans, while it would also have a significant residential, hospitality and retail offering.

“There are plans for restaurants, retail and small bars, so it’s really going to create a new heart outside of the main shopping centre,” he said.

“To be involved in developing the heart of any up and coming area is definitely something that’s attractive and exciting.”

Mr Ferguson said Devwest was expecting the state government to put out an expression of interest in March for the office accommodation, and if all went as planned, construction was expected to begin before the end of the year.

City of Joondalup Mayor Troy Pickard said both projects would result in a significant step-change in the Joondalup CBD, as well as future development.

“Both developments will enhance the vitality and vibrancy of the city centre and consolidate Joondalup’s reputation as the commercial, retail, entertainment, civic and cultural capital of the northern corridor,” Mr Pickard said.

“This in turn will be the catalyst for further retail development, including restaurants and cafes to service this growing population living and working in the city centre.”

A seven-storey mixed-use development has been approved at the corner of Reid Promenade and Davidson Terrace, with Mr Pickard expecting multi-storey developments to become more commonplace in the city centre.

Another significant project for the city, at which construction is already under way, is a $16 million, five-storey car park being built by Georgiou Group.

The car park is the latest in a string of major projects in Joondalup, which include a $300 million expansion of Lakeside Joondalup Shopping City (making it Western Australia’s biggest mall).

Mr Pickard said the level of activity had led to Joondalup being called the “billion dollar city”.

“The city has been very proactive and responsive in ensuring that the city centre is an attractive development destination with plenty of growth opportunities,” he said.