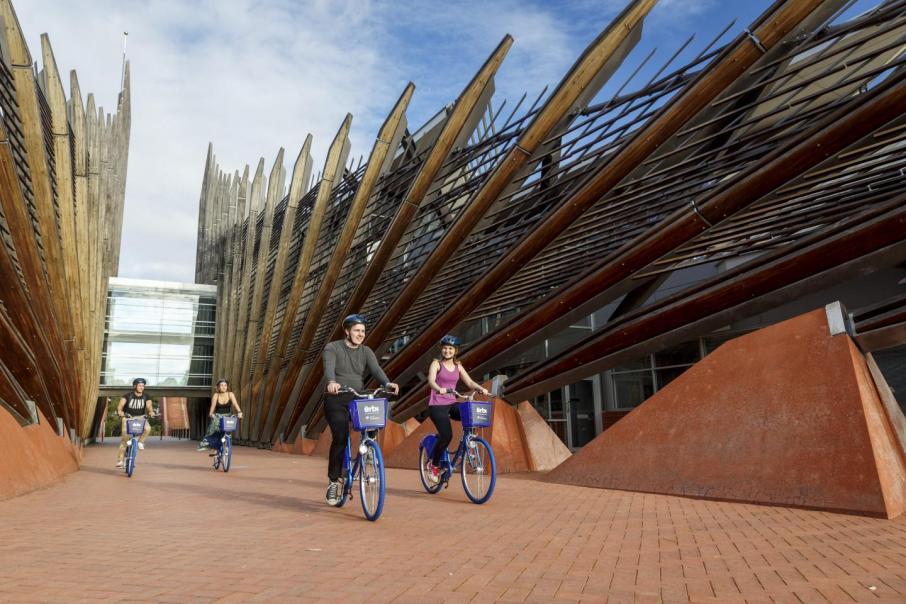 Delegates attending the national conference took the opportunity to experience first hand how the bike-share program was contributing to making Joondalup a healthier and more dynamic city.

urbi Everyday Biking Officer, Jeremey Murray, said: “It was fantastic to showcase the benefits of urbi’s bike-share system in Joondalup and its potential to create vibrant and active communities.

“Many leading planning experts recognise that bike-share will be part of the future solution to build better Australian communities.”

The urbi trial fits within the objectives of The Perth Transport Plan: for 3.5 Million People and Beyond – a joint initiative from the Department of Transport, Public Transport Authority and Main Roads WA. urbi has the support of many organisations such as Westcycle and Bicycling Western Australia.

urbi is halfway through a trial of its bike-share program, in partnership with the City of Joondalup. The company has about 60 of its distinctive blue bikes available to ride in and around Joondalup, spread between nine bike-share stations, containing up to 10 bikes each. It is the first time a Local Government has joined with a private operator to operate this type of community transport initiative in WA.

To date, the bikes have been used a range of people including local residents, commuters, shoppers, tourists and students. The high-quality blue bikes come with the option of helmets, with urbi being the world’s only bike-share initiative with a fully-integrated helmet solution. The helmets are stored in cabinets next to the bikes.

urbi was established in Perth by the owners of BikeValet. Its longer term aim is to organise a network of communities throughout Perth in which bicycles can be hired and left at depots for collection.

Under the urbi business model, bikes can be left for collection meaning the user is not responsible for returning it to where it was hired. This should help avoid the problem of abandoned bikes that have been seen in other cities using different bike-share programs.

This article is the second of 'Adapters', a series exclusively for Perth Media clients and partners, profiling news of innovative small businesses, start-ups and not for profits in WABN.