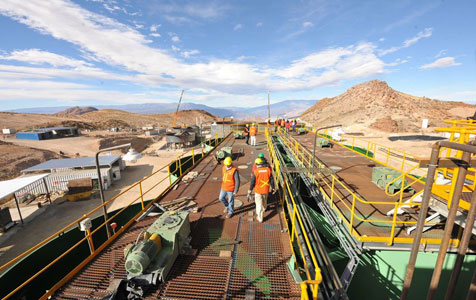 Troy Resources will slash the pay of its senior management, cut its exploration budget and jobs will be lost in Perth and South America, as the gold miner looks to restructure on the back of the falling gold price.

The Perth-headquartered miner announced today a raft of cost-savings measures, including slashing chief executive Paul Benson’s salary by 25 per cent for the next financial year, and reducing senior executive base salaries by 10 per cent.

The company will also spend just $5 million on exploration at its Casposo gold development in Brazil next financial year, down from a $15 million exploration budget in FY13.

Two jobs will go at Troy’s Perth office, while the company said it would also commence unspecified staff reductions at its Casposo and Andorinhas mine sites.

“The falling gold price impacts the profitability of all gold companies, not just high cost producers,” Mr Benson said in a statement.

“It is incumbent upon the management to look for ways to reduce costs and better position the company for the future.

“In Troy’s case, assuming the acquisition of Azimuth is successful, we need to conserve cash to enable us to be in a position to move forward with the development of the West Omai project in a timely manner.”

Mr Benson said the cost savings initiatives would position the company to successfully operate in a lower gold price environment.

The company extended its $188 million bid for fellow gold play Azimuth Resources earlier this week, after it failed to secure more than 90 per cent of the company and close the offer.

The offer will close on July 12.