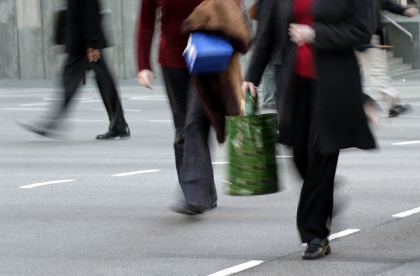 Despite another fall in the unemployment rate, the labour force figures offer plenty of support for the idea that the jobs market is weak.

Figures from the Australian Bureau of Statistics (ABS) on Thursday showed the number of people employed in August fell by 8,800 or 0.1 per cent.

As a result, the unemployment rate - the number unemployed as a percentage of the labour force fell to - 5.1 per cent, from 5.2 per cent in July and 5.3 per cent in June.

The lower jobless rate gives the impression of a strong labour market.

And it's certainly been strong enough to keep the unemployment rate down.

But that's been in large part the result of a declining participation rate.

That's the proportion of the working-age population either employed or fitting the standard definition of unemployed - jobless, looking for work and ready to start.

The participation rate peaked at 66 per cent in November 2010.

If it had stayed there, and employment had grown as the ABS reported, then faster growth in the available labour force would have spilled over into higher unemployment.

If that had happened, then the unemployment rate would now be 6.5 per cent, not 5.1 per cent.

But the participation fell to 65 per cent, a five-year low, in August.

And a declining participation rate is generally a sign of a soft labour market.

People respond to the scent of a job by joining the hunt but when the trail goes cold they give up.

So, while the unemployment rate is a positive sign, the participation rate's downward trend is a negative sign.

And so is the flat trend in employment.

Alternating ups and downs over the past four months have just about exactly cancelled each other out.

The ABS estimates the trend in employment is rising at a rate of 1,200 or 0.01 per cent per month, a pace that's - for practical purposes - as flat as yesterday's beer, about one fifteenth of what might be considered normal.

There's a good chance that the trend in reality may be positive, a consequence of an apparent pick-up in immigration that has not shown up in the population estimates underpinning the bureau's estimate of employment.

Even so, the fact is that the trend is not strong enough to prevent unemployment from rising unless the proportion of the population active in the labour market falls.

For those concerned about the direction for interest rates, this all means that the Reserve Bank of Australia (RBA) can probably consider cutting the cash rate again, if it feels the need, without worrying too much about sparking a push in wages growth spurred by lower unemployment.