Jandakot Airport lessee and property investment group, Ascot Capital, is eyeing land north of Perth for a potential expansion of the airport in the event of its controversial plan for a complete move failing to gain approval.

Jandakot Airport lessee and property investment group, Ascot Capital, is eyeing land north of Perth for a potential expansion of the airport in the event of its controversial plan for a complete move failing to gain approval.

A $500 million plan to relocate the airport to a 1,200 hectare site in Keysbrook was first released in June and caused considerable backlash from airport stakeholders, who felt the move was at odds with the airport’s own master plan from 2005.

Mr Fraser said the expansion of Jandakot Airport’s capacity over another site was a remote possibility, but it was entertaining the option by looking for a site with a minimum of 250 hectares.

“We’ve been informed unofficially that if we were to find a location north of the river, then all objections would disappear,” Mr Fraser said.

The company and the state government are looking in particular at potential sites north of Perth that had the right orientation and distance to surrounding development.

Mr Fraser said annual aircraft movement projections for 2025 were already well ahead of the original estimate of 476,000 made in the master plan, and were now estimated to exceed 514,000.

“To meet that capacity, effectively what we’ll have to do is expand the fourth runway, but there’s not a huge scope for expansion here,” he said.

“Hopefully we’ll get approvals from the federal government next year and start the planning process. The actual relocation could be five years out.”

Mr Fraser sought to reassure the public that the Royal Flying Doctor Service would not be jeopardised in any way by the relocation.

While the core of Jandakot Aiport’s business is from flight training schools, its long-term vision is to build on its general aviation business by attracting additional aviation tenants.

Mr Fraser said the airport had a massive opportunity to capitalise on additional business from training schools, as well as the growing market for executive flights.

Jandakot’s big brother Perth Airport made its intentions clear in this regard last week, when it announced plans to invest $8 million out of a record $85 million capital expenditure program for 2006-07 on expanding its facilities to enable the continued growth of the regional and resources-based aviation sector.

The sector currently represents one-third of all traffic that comes through the airport and is reportedly growing at an average rate of 60 per cent during the calendar year.

Perth Airport chief financial officer Wayne Tichehurst said in a statement the project would give the numerous airlines and the support functions that operate regional fly-in/fly-out services from Perth Airport, more room to expand.

Work is due to begin in December and will include the development of a dedicated taxi lane for general aviation, additional remote aircraft parking bays and an additional taxi-lane which would allow for additional hangars to be built as required by aviation partners.

The announcement of the expansion was followed within days by a massive $770 million refinancing to allow for expansion in the long term.

Mr Fraser believed Perth Airport was trying to muscle in on more of the executive jet market, but said there was no problem because Jandakot was still committed to growing its core business of training flights. 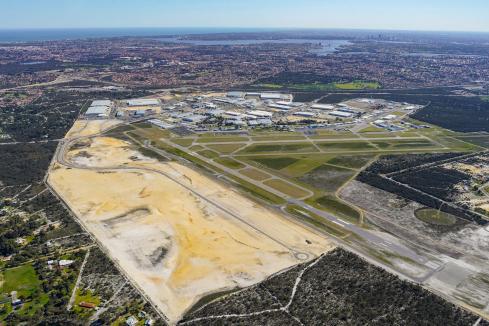