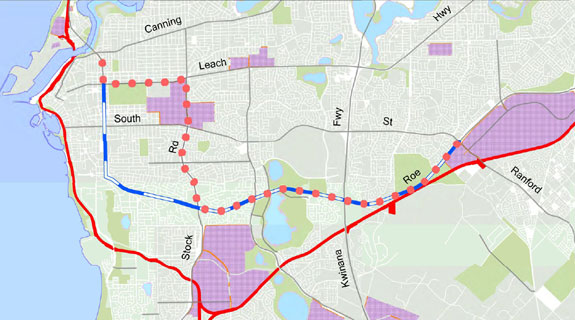 The proposed route (dotted line) for the Roe 8 extension.

“(The state government) will use innovative planning, design and construction measures when building this road,” Mr Marmion said.

The Roe 8 project is a proposed 5.2-kilometre extension of Roe Highway from Kwinana Freeway to Stock Road.

It includes a major upgrade to the existing interchange between Roe Highway and the freeway, as well as interchanges and/or flyovers at Murdoch Drive, Bibra Drive, Progress Drive, North Lake Road, Coolbellup Avenue and Stock Road.

The project received an environmental recommendation of approval from the Environmental Protection Authority in 2013, but has since been objected by 165 lodged appeals.

The City of Fremantle has also been vocal in its opposition to the proposal, which is a key component of the Perth Freight Link.

At its latest meeting, the council called on the state government to put the entire project on hold, until further planning or better options were developed.

The city is most concerned with sections 1 and 2 of the proposed Perth Freight Link, which are the links from Stock Road to the port, and the Roe Highway extension, saying there has been insufficient planning and analysis of the current proposal.

The City of Fremantle said the plan was contrary to decades of freight transport planning in the metropolitan area, would have severe impacts on the Beeliar Wetland and Banksia Woodlands, and would negatively impact the urban renewal of Fremantle and East Fremantle through the creation of a by-pass.

The City of Fremantle would prefer the development of an outer harbour serviced by rail, which would be more cost effective, save high value conservation areas, minimise local freight impacts and reduce greenhouse gas emissions.

The City of Cockburn is also against the Roe 8 extension, agreeing that the port would be serviced better by putting more freight on rail.

However, in assessing the matters raised in the appeals, Mr Jacob said he was satisfied the EPA had adequately considered the key environmental factors.

That being said, he allowed seven of the 11 appeal grounds by strengthening conditions and adding several new ones.

Mr Jacob pointed to a three-to-one replacement for any removed vegetation as among the toughest of these conditions.

He said that this meant a "minimum of 234 hectares of bushland habitat which needs to be obtained, restored and preserved." Mr Marmion said the project was a strategic link in Perth’s road network.

“The completion of Roe 8 is critical to fix major road safety issues,” he said.

“Tens of thousands of people using Leach Highway are being exposed to unnecessary risk because this roadway was never designed to carry such a volume of trucks and cars.”

The minister said accident figures have shown the risk was unacceptable.

“Completing Roe 8 is the safest option for our families,” Mr Marmion said.

If all approvals are granted, construction could begin as early as the start of next year.