A long-running dispute over a four-storey development at the site of popular northern beaches cafe Yelo appears to have been brought to an end today after the proposal was refused. 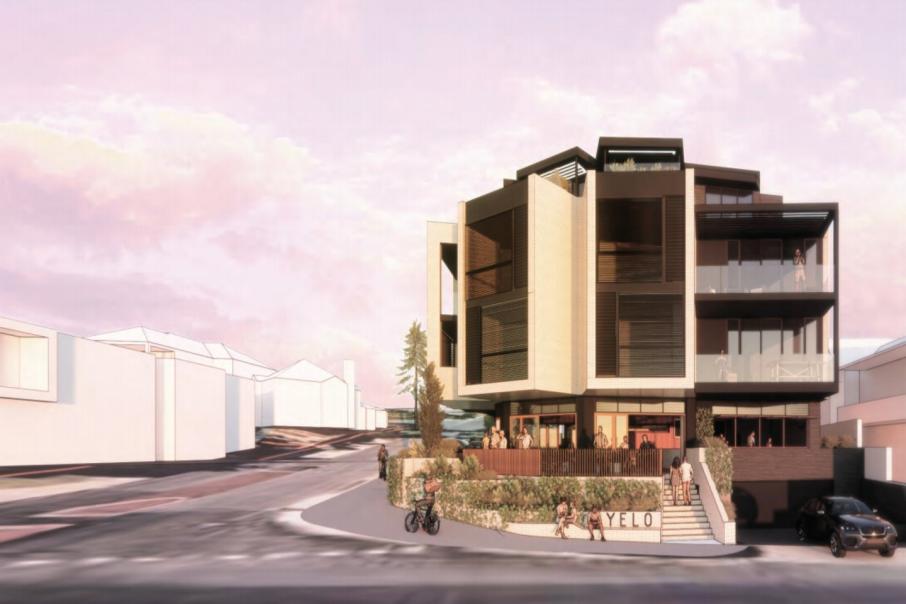 The JDAP reaffirmed its decision to refuse a development application for the $4.75 million proposal on West Coast Highway during a meeting this morning. Image: MJA Studio

A long-running dispute over a four-storey development at the site of popular northern beaches café Yelo appears to have been brought to an end today after the development assessment panel affirmed its decision to refuse the plans.

During a meeting this morning, the Metro-Inner Joint Development Assessment Panel (JDAP) refused an application for the $4.75 million proposal spearheaded by property development company Momentum Wealth, which proposed seven dwellings and a commercial tenancy on West Coast Highway.

The state's administrative tribunal had recommended the planning body reconsider its refusal in July, after the proponent requested a review the decision.

Following a series of mediation hearings and a site inspection, the JDAP was formally invited to reconsider its decision, as well as review additional information, amended plans and a traffic impact statement supplied by the proponent.

But the responsible authority report accompanying the recommendation stated that the outcome of the amended plans was “less than ideal”.

The decision backed the City of Stirling council’s unanimous decision to recommend the panel refuse the proposal because the height and parking proposed did not meet the requirements outlined in the local planning scheme; with councillor Karen Caddy providing a deputation at today’s meeting outlining the council’s concerns.

The proposal has been the subject of heated local debate since the plans were first unveiled back in 2019, with the most recent consultation period attracting a total of 125 submissions; 90 of which objected to the proposal.

Engineering company GHD, which was engaged by local residents Ann and Roy Burton to perform a Luminance Study to determine the impact of overshadowing, found the proposal to be “significantly out of context” with the surrounding residential area and warned that overshadowing would have an adverse impact on the adjoining properties.

The company alleged that the level of overshadowing on its southern neighbour to be more than 2.4 times the level permitted in the area.

But Momentum Wealth managing director Damian Collins, who is also the president of the Real Estate Institute of Western Australia, warned the decision could cost the community their local café.

He said he was disappointed with the outcome, which followed several changes to plans for the site off the back of recommendations.

“We have tried four times, we kept coming back, we made dozens of changes,” Mr Collins told Business News.

“The city have made their opinion clear – they don’t want the café.

“So that’s the end of it, we’ll now be going back with alternative plans for the uses that have been permitted.”

Mr Collins said that included exploring a commercial tenancy on the ground floor instead of a café.

The café has previously come under fire for its popularity, attracting visitors from outside of the immediate neighbourhood, increasing traffic.

“The reality is along the coast, if you go to Fremantle, Cottesloe, Scarborough, Hillary’s… go to any area that’s popular with beaches there’s always going to be parking challenges,” Mr Collins said.

“People from all over Perth - not only the local community - flock to the beach there, they drive and walk and bike ride go to the dog beach… one little tiny site cannot solve all the traffic problems in the area.

“Ultimately we’ve asked the City of Stirling to put in traffic management plans like they have in any other community along the coast of substance, so whether you’ve got timed parking, no parking areas… all those things they could have done and the city’s response was we don’t want to deal with it.”

Mr Collins said the development application proposed 21 car bays, with 14 allocated to the apartments and the remaining to the café and that demands for turning circles for trucks had been unrealistic.

“The expectations on a small corner site in a local centre... were for something the size of a Woolworths distribution centre on a local centre in a suburban location,” he said.

“There will still be a development on the site, there will be apartments above and commercial use on the ground floor.

“The city has made its position clear, they’re the ones that have to respond to the local community when they lose their café.”