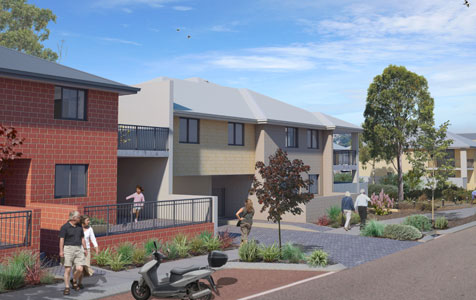 An artist's impression of the Parkside Development on Whitlock Road.

Building is set to begin later this month at the Parkside Development on Whitlock Road, which will consist of one, two and three-bedroom apartments across a series of two-storey buildings at the Queens Park Estate.

The project is expected to be complete by November next year.

“The multi-residential division has a different approach to that of the commercial construction arm in terms of the systems and structure required to maintain competitiveness,” he said.

“This will allow the division to target smaller projects than the commercial division and that will improve the sustainability and growth of the business.”

Mr Dodds said the division would primarily focus on the Perth metropolitan area, but also be active in the north-west of the state, where the company completed its first ever multi-residential project in 1958.

JAXON started construction on 286 apartments, units or townhouses in the 2013-14 financial year, according to the HIA.

JAXON’s Kane Williamson has been appointed manager of the multi-residential division.